Trine is a side-scrolling action platform and puzzle video game, available for the PC and PlayStation Network. It was developed by the Finnish company Frozenbyte, and released for PC on July 3, 2009. Trine takes place in a forsaken and ruined kingdom. It begins with a thief searching for a legendary treasure in the Astral Academy, a derelict institution of magical studies. Unknown to her, a wizard remained at the academy to study the skies, while a knight arrived there to protect the academy. The three meet at the chamber of the ancient treasure and touching the object at the same time, disappear. 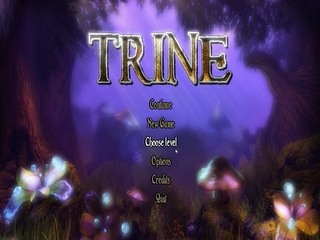 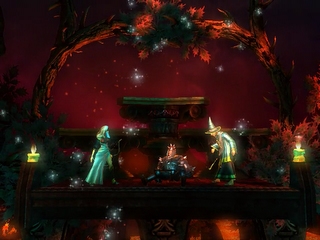 Main Tricks Used:
1. Effective roping. One can effectively use the rope many times on the same object to increase the boost by cutting the cord immediately and shooting again. A deep swing is always the best for fast horizontal progression, but not always possible. Fun things to notice is that the rope can pass through anything once attached, and it can also attach to unlit torches.
2. Triangle roping. Hard to do fast, but a noticeable improvement over walking, and even warrior charge switching.
3. Warrior charge switching. Charge (shift key) with warrior, then switch to another character once the kick animation starts to cancel it, then switch back immediately to charge again. Only used occasionally when constructing a triangle was not much use, like running uphill. This also works very badly on uneven terrain.
4. Lever cancelling. Start pulling a lever with a class you do not need, and immediately press escape and switch class. The class you pulled the lever with will be frozen for a time commensurate to the time it would have taken to fully pull the lever. The initiating class can only be unfrozen by waiting, so it is only really useful if this can be done in a big drop when he doesn't need to move. Note also that a frozen player, while not being able to cast spells, move or shoot, can still pull another lever (and the freeze effects don't stack)! It is used for instance, at the end of Bramblestoke.
5. Fast cutscene cancellation. Escape is actually bound to both pause and cancel cutscene, with the latter taking priority when there is a cutscene. Binding pause to another button allows for cancel spamming to speed up the first level for instance.
6. Checkpoint restarts. Moves you closer. Results in freezing penalty if used with a lever. Only used on Forgotten Dungeons and Iron Forge.
7. Door roping. One can rope through a door right before it opens. If done right (see crypt of the damned end), then one can build up height for a huge swing once the door opens.

Astral Academy
Only level where switching abilities are disabled, giving an excellent false first impression of the speedrun. Boring level.

Academy Hallways
Skip the skeleton trap sequence by triangle roping through the door (not solid until completed the closing animation). Got a bit lucky before the bridge, but actually passed the collapsing bridge (this is random) before the rock fell down : ) Use the warrior's (later achieved ability) to charge kick the big rock away (marginally faster than to lift it with the wizard). Roping on the water wheel effectively renders you weightless. In fact, each rope impact helps boost the wheel around (so this method is easier, and just as fast as trying to move the wheel around with the wizard while standing there).

Wolvercote Catacombs
Plank hits the first button to open the vertical gate, and a skeleton corpse pushes it down at 3x the normal speed. Skeleton king can be killed with one hit, but this is very hard. The last rope jumps are hard.

Crystal Caverns
The first rock here can be slashed to open the door as well, but this doesn't help unless you are really lucky. A plank is summed before the water to dive faster (excellent discovery by Orunin). Roping through the mountain afterwards to look cool.

Crypt of the Damned
Fire arrow opens first door, then pixel roping some unlit torches, and hitting a complete blind shot before the boss. The last door opens a couple of seconds after killing the boss, and one can gauge exactly when by shooting ropes through it. This also builds potential energy for a huge jump. The boss also knocked me through the door once (saving me 5s), but I was unable to replicate this. Finally, rope straight through the non-solid bridge.

Forgotten Dungeons
Hilarious skeletal water death by the lever. Lever cancelling with wizard by the second big wheel, then wizard cancelling the next lever as well with checkpoint restart. Wizard is unfrozen in two drops, and by waiting at the button before summoning new triangles.

Throne of the Lost King
One can almost fly through this entire level. But the flails at the end are hard to pass quickly. This run I got the timing almost perfect and triangle jumped over almost the full length of the gears. Doing it faster would involve beating a flail cycle. However, I think possibly the elevator descended slower than normal. :/

Fangle Forest
Took me a while; lots of small tricks to get right. Triangle jump over the water is particularly hard to make without splashing into it (thus failing). The last huge triangle under the bridge is the hardest, but this is simply too awesome not to do.

Shadowthorn Thicket;
where every rope point has to be memorised in darkness. Boss opens the door by stepping on the last button, plank keeps the other 2 down. Very happy with the rope usage in this level.

Ruins of the Perished
Swimming speed in water is increased by constant warrior slashing, although slight blunder at the water gate. The timing there is hard to get right. Huge double rope jump over the next wall, then proceed to triangle jump through almost the rest of the level. In particular, another skeleton trap sequence is avoided by jumping over the wall. Unluckily roped through the last set of planks and there's also a slight blunder at the last triangle ascent, but otherwise a good run. Probably the most annoying level to play.

Heartland Mines
Fire arrow pushes a wooden log onto the second button. The finish is super smooth here : )
You normally only get triangle at this point in the game.

Bramblestoke Village
Getting onto the first branch means skipping a segment below, and also finding weird aerial skeletons. The bats will follow you till the very end of the level almost, so it's best to kill them when you got them all (the fire things in the lower levels will only dilute their numbers). Lever cancelling with wizard at the end of the level. Not missing those two ninja ropes near the middle would improve the run additionally, but the rest (hard) is too well executed now for that to be a simple task.

Iron Forge
Big map, but one can run through it vast using a sequence of elaborate tricks. Lever cancellations, reusing the first triangle, almost floating to the second and third checkpoint by good rope usage, ludicrously scaling a wall, unfreezing the wizard after a ridiculous rope jump through a huge section of blocks then unfreezing the wizard in the subsequent drop. It's hard level to get right, and that's just the first part. The door in the blue area is sneakily opened by two well placed planks that actually break the cover and push 3 buttons above. Next, jumping across the lava by the flails is a pure luck shot, and usually ends your run right there. The rest depends on the cycles of flails and elevators. I managed to get the in the cycles I aimed for by the elavators, but was a bit unlucky by the last flail. Awesome level!

Tower of Sarek
Effective roping almost all the way. Sarek doesn't seem to expect me to move this fast, because I can see the places where his movement path stops. Some notable improvements on earlier runs: triangles in the beginning, pixelroping at the last part of the first major ascent, cancelling a spike ball from spawning, and using triangles to speed up the last bits (these two also make the run much easier).

Anyway, hope you enjoyed watching this run as much as I did making it, and hopefully someone will want to continue this for even faster times in the future : )

P.S. If you want to leave me comments/questions/feedback, then this can be done at http://clux.org/entries/view/2370