Replay studios' 2009 shooter Tunnel Rats, based on Uwe Boll's movie 1968 Tunnel Rats, takes place in the Vietcong's dark tunnels during the Vietnam war. The game's reception was bad and it has the average score of 30 on Metacritic. 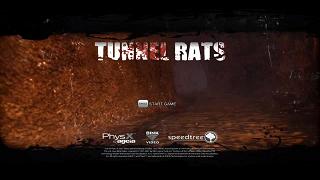 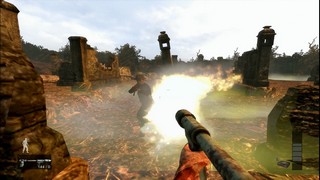 - The tunnels are dark. Seriously. The videos aren't messed up, that's what the game looks like when you skip the flashlight.
- Health is regained between levels.

Chapter 1: Waking Up to a Nightmare
After the unskippable intro movie I jump out of the hole I'm in and head left where I grab a knife and hit a checkpoint which clears my vision. From there I head towards a bush that I use to jump out of the visible map. I can't go straight to the exit because the level is still there, I just can't see it. In the end I hop into an invisible tunnel and stab an invisible enemy.

Chapter 2: Dawn
I take a whole step before jumping out of bounds and run to the exit. Some movement must be done before reaching the exit because the tunnel is still there.

Chapter 3: On the Air
A small visit on the edge of the map skips most of the level. The last segment in the tunnel is the hardest in the game, simply because stabbing a Vietcong-trained snake is damn random. I waste some bullets in the end because this was actually the last level I ran so I had to have the bullet count match the next chapter.

Chapter 4: Devil's Playground
Yet again, out of bounds all the way.

Chapter 6: Abandon All Hope
No major OoB skips? Madness! The only possible OoB spots are too far into the level to save any time, but at least jumping off the cliff in the end saves some time. I grab a machine gun because it's on my way and I thought it'd be good for the final chapter.

Chapter 7: Bowels of Hell
The entire chapter takes place in a tunnel so I can't skip anything or see anything. Quite enjoyable.

Chapter 8: Light at the End of the Tunnel
No skips here either. After trying the last fight a few times I noticed there was a flamethrower lying around, which is far better weapon than the machine gun I originally wanted to use. The fight is not good for speedrunning, the enemy spawns are seemingly random, it's hard to figure out where shots are coming from and sometimes the enemies spawn inside the bushes. I still put up a nice fight and manage to get the time well under 5 minutes.