Two Crude Dudes. One of them is crude, the other is a dude. Actually, they both are. Every title song needs 4 lines of text. Radical guitar solo. TWO CRUDE DUDES! 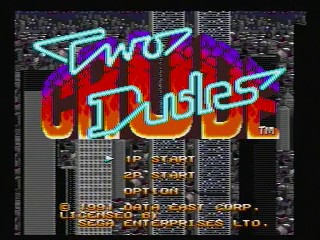 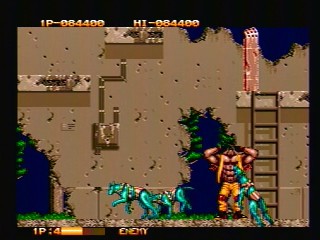 Ah Two Crude Dudes, another Data East classic. After the TOP ARCADE HIT!* that was Bad Dudes vs Dragon Ninja, Data East decided that being bad just wasn't bad enough anymore. That was for those suckers back in the late 80's. They needed something even more edgy for the hip happening kids of the 90's. They had to get CRUDE.

Titled Crude Buster in Japan, the game follows the journey of the Two Crude Dudes (this is the closest thing to a name that we are given for the protagonists) through the post-apocalyptic New York City to take out the criminal organization "Big Valley". And what's their motivation, you might ask? Is it a moral quest to save the world? What about their captured girlfriend? Perhaps some personal vendetta for a misdeed done to them in the past? The answer to all of these questions is no, the Two Crude Dudes do what they do for one reason and one reason only: The almighty dollar.

Anyways, enough exposition. Some basic info about the game and the approach I take to clearing it quickly. The dudes have 3 basic actions: Attack, Throw, and Jump. Any attack barehanded does exactly 1 damage. Throwing an enemy does 2 damage to that enemy, and 1 damage to anyone that enemy collides with (in 2 player play, the players can throw EACHOTHER as projectiles this way). There are then 5 types of items which can be used. The first is pipes, which can be swung multiple times for 2 damage a swing, but have a limited number of hits before they break, or can be thrown in a straight horizontal path, also for 2 damage. In a very limited number of places, you can pick up a grenade that one particular enemy throws and hurl it back for 2 damage (maybe more, I've never hit an enemy who had more health than 2 to start with this). The two other attack items can both only be thrown. They both do 5 damage, but are differentiated in that some go straight horizontally and others go at a downward angle and bounce once off the ground. Lastly are the power colas, which the dudes will immediately consume for a minor health refill. One last 'attack' of sorts to note is that colliding with non-boss enemies will actually damage them 1 point (as well as you). This allows for some very strange ways of charging through situations.

The result of all these numbers is that I want to maximize the amount of high-health enemies I hit with large objects, and do approximately correct damage to other enemies based on whets available. How difficult stages are is mostly a function of how many items they give me to throw, and knowing where and when to use each item I have available. This is made somewhat more complicated (if not impossible) by the fact that sometimes the game will spawn multiple waves of enemies at the same time instead of waiting for the previous wave to die. I have absolutely no idea why the game would do this other than Data East just having sketchy code. The rest of running the game is knowing how to manipulate the enemy AI, which has the side effect of making the game look really, really easy. The other thing to note is that I select hard difficulty, which mostly just increases the number of enemies who spawn.

With that out of the way, I'll list a few notes for what went down in some specific stages.

Stage 1: The game begins in a way truly fitting a Crude Dude: Rolling out of an exploding building. I pause before approaching the Frisbee guy at the start because it manipulates him to walk forward so I can throw him. Getting grabbed by the midget in front of the building was a dumb mistake, but since he dies after doing the attack it's a moot point. I accidentally ran into the boss, which cost me the amount of time his invulnerability lasts, but otherwise the fight went fine. The manipulation on the first boss is...pretty trivial. And then we do a pose. I have no clue at all what this pose is supposed to be or why it's supposed to be impressive. At least the generic arms up win pose in bad dudes made sense.

Bonus 1: POWER COLA. Blowing up the cola machine saves time over refilling health, but if I grab the cola just as its exploding, I can at least get a minor refill here. The fact that this is the main health restoring mechanic of the game is why I don't care to attempt deathless. Well, that and that death costs almost no time. These things also have very oddly tracked health, since after each 3 hits they take 1 damage and enter a slightly longer invulnerability time.

Stage 2: Stage 2 has a ton of objects to throw. More objects than is useful, in fact. The jet thing I throw right before the boss is critical to get, while it will leave the screen of its own accord, it will continue re-spawning and hauling in enemies until I kill it. Once again, this boss's manipulation is pretty trivial, which is good because he's obnoxious to fight normally. An alternate manipulation is to start up top so he jumps up, then to jump down to the first step and do upward punches, but it takes longer since you have to wait for him to jump and to walk a couple extra steps.

Bonus 2: POWER COLA! Drink it for your health!

Stage 3: I honestly have very little to say here. I take it a little safe against the gun armed guy because he's very easy to miss with throw items, or two get hit by and drop your item. As far as the boss goes, I manipulate him to charge and tank the hits until I am at critical health because it is the easiest way to do the fight. Once I'm at one point left, I manipulate him to jump over me and catch him as his invulnerability runs out. I don't attempt the jump manipulation for the entire fight because the positioning is extremely tight, and missing it means the boss will generally toss you. Getting tossed results in a really long dizzy animation if you live through the attack.

Stage 4: Ideally I'd hit all 6 of the jumping gas mask guys with the first thrown item, but getting them all in 2 items is still way better than average. Against the 3 flamethrower guys, one of the most common problems with running this game occurs; I one of them spawns late. Because he spawned late, I had to use an extra item on him, but fortunately this is one of the places I can plan ahead in case of that happening without really costing much time. The tanks are one of the most critical things in this stage, since having them both alive at the same time makes it really difficult to fight them hand to hand. This boss is the first with a particularly notable AI manipulation, by changing heights right as he approaches, I can throw him out of his jump to prevent him from attacking (this is, of course, assuming the game doesn't randomly decide to not grab the ledge. It didn't happen here, but sometimes the height change just doesn't work). This is really important because his attacks are obnoxious, as will be shown later.

Bonus 4: POWER COLA! Drink it while you can!

Stage 5: This stage is where the game really likes to take early game minibosses and just throw swarms of them at you. Most of them are placed near high damage throw-ables, which is great until one of them spawns late and completely ruins any ability to use said items. Fortunately that didn't happen this time. This is the only stage where jumping over a wall instead of taking it out is worth it, since in most places it creates WAY too much lag to do that. The three jumping guys coming out of the wall hole near the end of the stage is actually a glitch, there's only supposed to be two of them. It doesn't really cost any time because of how the game works, but it confused me pretty badly at the time. This boss doesn't have any real manipulation to speak of other than not standing too close to him. His attacks are so slow that he doesn't even get them off before getting hit again.

Stage 6: Picking up and throwing the tanks instantly kills them. It also just looks amazing. The mandatory elevator portion is great since any enemy tossed off instantly dies. Plus it gives me a chance to dance. The boss rush goes pretty smoothly. The stage 1 boss gets cloned for some reason, and since I have to wait for their invulnerability anyways, I use their bodies to blow up the wall. The stage 2 boss is MIA for some reason. Stage 3 boss goes perfectly, I do the same exact manipulation as the first time, and again manage to not mess up the jump manipulation a single time. Stage 4 boss is just as trivial as ever.

The stage 5 boss is absolutely terrible without a platform to jump up onto. He's one of the few enemies who has attacks that can hit you while he is in hit stun, and because there's no way to really run far from him, it's mostly luck to get a good fight here. I attempt a very specific manipulation near the end of the fight by trying to be an exact distance inside his sprite, but mess it up a couple times which results in doing no damage, and sometimes he can just choose not to do the strike and hit you regardless. I seriously have no idea how to approach this fight, but it goes well enough here.

The last boss is fantastic. I don't know why the developers thought that his first form should be completely harmless AND have the most health of anything in the game by a significant margin, but he does. I throw him instead of just attacking him since he goes through the same recoil animation either way. His second form is very threatening if you fight him in any reasonable way. But by hitting him at a fairly lenient distance and then just walking straight into him, it manipulates him to punch in a way that won't hit you. The result is the really, really goofy looking fight you can see here.

With big valley, our heroes make their way out in the same way they made their entrance: A really cheesy explosion. They then have a very circular discussion about how great they are, during which they give one of my favorite lines from a video game: "We're heroes...We'll be rich!" The ga then abruptly ends with no credits sequence. Unless something I don't know about happens after leaving 'the end' on screen for long enough, that's seriously the entire end of the game. I have no idea why anyone wouldn't want their name to be attached to this marvelous game, but so be it.