Originally released in Japan as Hebereke in September 1991, Ufouria was released in Europe in November 1992 but never got an American release. Ufouria is an adventure NES game, not very unlike Metroid. The player is put in the middle of a big world, in which items have to be found and bosses have to be beaten to get the team of four safely home. 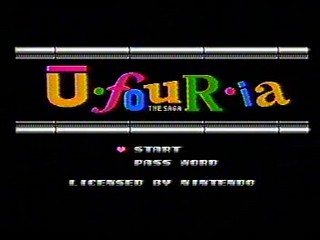 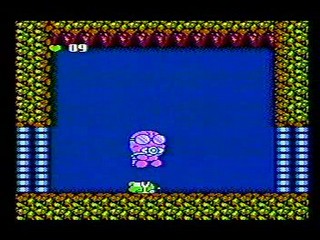 Enter Ufouria: The saga! What saga? The saga about Bop-Louie, Freeon-Leeon, Shades, Gil and their adventure in the strange world they just happened to fall into.

In the beginning of the game, only Bop-Louie is playable. Freeon-Leeon, Shades and Gil are spread out over the world and have lost their memories, causing them to attack you when you find them. The solution is of course to fight back and whack some sense into their heads.

I try to make people interested in this game. That's one of the reasons my commentary is so long.

The first target is to find Freeon. He's easy and is just in the beginning, so I restarted if I had a bad battle. He got the ball once, but that didn't cost very much time, I made up for it a bit by managing to hit him in a position that's not always easy to do. Freeon can walk on ice without falling over and can swim on the water surface. I never understood what's meant with "can walk on SNOW and ice", since all characters can walk in snow just fine.

Then it's time to go after Bop-Louies secret weapon, that is the first item that must be collected to beat the game. It has to be used to defeat one boss. Nothing else works on him, and yes, that's annoying... I've tried with the other special weapons, but to no avail. The best would have been if Shades' secret weapon worked, since it just takes a few seconds to pick up, as opposed to this that takes at least a minute... I even tried Gil's secret weapon. Anyway, this guardian boss is easy. Again it's probably possible to defeat him a few seconds faster. That duck-jump I do was a mistake, that thing happens I believe if you press jump but then start holding down before you actually have left the ground... let us call it that I was showing off, okay? Something that always have eluded me is why the star is blue when you pick it up, but green in the inventory.

In the Ice Cave I make use of a control glitch, if you do a quarter-circle with the d-pad, starting with holding the way you are going and stopping with holding straight down, you will keep going forward. So what help is this? Simple. If this is done, Freeon jumps at the same speed as he is walking. Otherwise, he jumps slow. Then I'm off to get Shades! I try to pick up life when falling down the shaft with rats. Any time I wait around after killing an enemy in the entire run is because I hope they will drop a life crystal. The mines is easy, just take a ride in the mine carts. I dig a bit to the music, that's the animation for charging Bop-Louies secret weapon by the way. Shades is one of the more annoying bosses in the game, he jumps around too much and usually takes freaking forever to throw the ball if he ever gets hold of it. I've had perfect fights against him, sadly didn't happen this time. I was really freaking annoyed when I almost hit him near the start, but he jumped so I missed and he grabbed the ball instead >__< But luckily, he threw the ball pretty fast both times he got it. It could've definitely gone worse. What Bop says about that Shades can jump "very high" is bullcrap. He does, however, fall much more slowly than the other characters. So he can jump much farther. This is, as you can see, needed to make one jump to be able to reach... well, the part of the game I have to go to now.

You see I kill the fish, well, that's thanks to collision detection, I suppose. I'm still in "Attack" status when I hit the fish, so it registers and kills it. And I hate when that frog do that.

Tree area! It's a long climb, and it goes up, then down, then up again. And then back. It went pretty flawless, except for me fooling on that edge a bit. If you wonder why I'm just going back after delivering the egg, it's because I don't have what's required on the other side. But I have to deliver the egg now, because this bird is in more than one place... jumping off the tree with Shades allows to skip most of the tree, and taking a little shortcut skips the rest. Just stand in the right spot and jump.

Then it's time to go to heaven. At least sort of. Those floating clouds I jump on... during a practice run, something very weird happened: the first cloud just wasn't there. That was a cheap fall if anything...so, there's the bird again, taking me over. It wouldn't have done that unless I returned it's egg in the tree area. So I go even farther up, dancing along the clouds 'til I reach the boss. He's easy. His second form as well, I just take a hit when Bop wouldn't throw the ball... Then I get Bop-Louies Suction Cup. Yay!

So it's time to go after Gil. I kill those birds for health, since they are in the way. I pick up a medicine bottle on the way, though I could pick it up later - I can't use it until just before I pick up a new anyway, but this seemed like the most convenient time to pick it up. The way to Gil is mostly climbing, and then jumping on a rock. Nothing out of the ordinary. Gil himself is a wuss. I can't believe I took a hit there.

When the team is finally assembled, it's time to go hunting for keys! The first one is just 'round the corner. The alien boss is a major pain in the ass, if he's going away from you it's frickin' hard to actually hit him unless you throw when he's going down. He's no better out of his spaceship either. I just hate him. Luckily I got a flawless fight against him... Oh well, Red Key acquired - and time to go on to a slow part...

This run contains one big stupid mistake, that cost me about fifteen seconds. It's here, when I go back to the tree. I go the wrong way after killing the first egg, making me to have to go back to take the shortcut. Blegh, I felt pretty stupid, but decided to not restart. Then I had some major fooling around before finally climbing up at the right place... I think I made up for it a bit by not getting hurt very much throughout the run, but it just looks bad. So, over with the bird, as I'm now equipped to take care of the other side...

You see when I kill that blob, how you see a green ring? I have NO CLUE how that happened, but it's just a graphical glitch - the green ring is indeed an item you can pick up in the game, but... anyway, use medicine and get new. I need at least 40 life for the upcoming fight, which is why I have to save my first medicine until here. Another graphical glitch occurs on the water tap, with a "shadow" of Gil... navigating in water is pretty slow, and there's a lot of momentum.

The boss fight is ugly but I know of no faster way to dispose of him, as he's just a little bit slower than Gil. So to collect the third and final required item... Gil's bombs. You see them on the way back. What's funny is that the tiles behind the breakable bricks aren't water tiles! That's why I make a sound when jumping there.

Now it's time for the thing that ended most of my runs. The lava place... thanks goes to Cloud for saying that it'd probably be possible to bounce all the way with Shades. I didn't believe him at first, but realized that I could take hits and make use of the invincibility to get out of the lava - otherwise, it saps 10 life EACH SECOND! As you can see... I was like WHOA when that happened, and I was lucky to have exactly 11 life left... without the medicine, I would've been toast right there. Understand why I put the low item run on ice? I make a little mistake and lose 20 life in the second lava pool, luckily my boss fight was good... almost perfect except for that cheap spear hit. It was one of my better battles against this boss, actually. A fitting nine hits on the cat, then get the blue key. Back over the lava pools, with some fooling around on the first but a perfect other, and away towards the final key!

Back through the ice cave, through the temple, and through the waterfall. I don't think the programmers intended for you to be able to jump past the waterfall, but to go from the top, but with enough speed and a precise jump it's possible. Then blast some bricks and down into the dark area!

...and now for a long and boring part of blasting through a screen's worth of bricks. Turn on the light, then through more bricks, then EVEN MORE... picking up a heart container and a medicine on the way to the boss, who's one of the most annoying of all. Just slow... and one miss which cost me dearly. Oh well, luckily only five hits... collecting green and final key, then off to see the final boss!

I happen to know that this big, green and evil guy is named Unyo. Unyo is not very hard for a final boss, but you won't know that from my horrible playing against him. I have had worse battles, but this was just ridiculous... Shades is used for his long air time, which helps when scoring hits on the little dude. I can tell when he's going to expose his red jewel in about seven cases of ten... but I still take hits and use my medicine.

The ending of this game is messed up, but I really like the credits music.

I will probably try to improve this run one day, but I hope to find some trick that safely can bring it down to under 40 minutes... and I have the low item run to fix as well.

Anything you have to say? Catch me on the forums, on IRC (you'll probably find me in #metroid on metroid2002.com) or mail me at KennyMan666 АТ gmail.com.