Released in 1992, Ultima Underworld: The Stygian Abyss is a first person RPG. Assuming the role of the Avatar, you attempt to find and rescue a baron's kidnapped daughter in a large, multi-level dungeon, before having to prevent a demon from taking over the world. The game is rather realistic, with players required to eat and rest, light sources can burn out and torches may be used on corn to create popcorn. 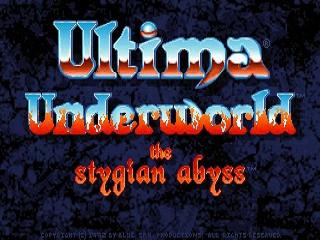 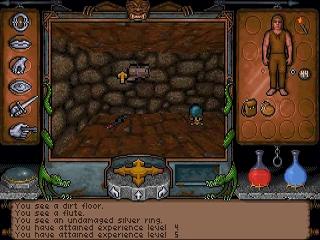 Huge credits to Gammadragon (the previous best time) and Lag.com on the SDA forums for their contributions of ideas and runs. I followed Gammadragon's final route with a couple of additional deathwarps and cleaner execution. Their planning for that run can be found on the SDA forums here: http://forum.speeddemosarchive.com/post/ultima_underworld_1.html

Timing for the run begins after character creation, allowing me to re-roll several times before the run starts to get a good (randomly-generated) character. Timing ends when I run into the green moongate at the end of the run, starting the ending cutscene.

To beat the game you must do the following things:
* Collect the 8 talismans of Sir Cabirus (Sword, Ring, Cup, Taper, Standard, Shield, Book, Wine)
* The sword is in two pieces and must be repaired
* Collect the pieces for and complete the "Key of Infinity"
* Bury Garamon's bones so that his ghost can help you
* Throw the talismans into lava in a locked chamber to banish the 'Slasher of Veils' and beat the game.

This run abuses glitches/bugs:
* Magical scrolls and potions that are burned to debris by a fireball retain their magical properties, but have unlimited uses.
* A big shortcut in the Ethereal Void (colourful final area) that should probably have invisible walls around it
* In room where you're told to flip four levers in a certain order (to get the 'Ring of Humility'), the first lever isn't required.
* You don't need to rescue the Baron's Daughter (the whole reason he threw you in the abyss in the first place). She still appears in the endgame though!

Using Shift+(W/A/S/D/X) ("easy-move" keys) makes you move a tile at a time. This travels at walking speed, even while swimming and flying (which otherwise make you move slower). When you see the movement go juddery it is because of this. However, if you try to do this when flying over a monster on the ground you will stop.

Run commentary:
* Level 1: The only thing of importance in this level is the silver sapling. You can plant this anywhere and it acts as a respawn point if you die, which is very useful for deathwarps. We take this and immediately go to the staircase to level 2. I run into the wall by the staircase fast to take a small amount of damage for a deathwarp later.

* Level 2: Again I want to get to the next level as fast as possible. On the way we open a door that we walk past very briefly for later, and I throw myself at a wall to take a bit more damage.

* Level 3: I poison myself in a pond near the beginning to take more damage, and plant the silver sapling to let me respawn close to level 4. I use the "Easy-Move" keys to swim quickly to one half of the "Sword of Justice". I then jump into walls to kill myself and pick up the sapling.

* Level 4: In a secret room by a waterfall I pick up a flute and 'Scroll of fireball' for a glitch later. I also pick up the 'Ring of Leap' to let me jump higher. I hug the wall near the warrior Rodrick to skip a cutscene, plant the sapling near him and continue to the Bullfrog Puzzle. I raise two platforms and jump into a secret room with a wand of fireball. I use this on my scroll to create "Debris of Fireball" that can be used infinitely, and then jump my way to level 5.

* Level 5: I run into the crypts and grab a potion of greater heal and the second half of the sword, and kill myself (by running into a fireball) to return to level 4.

* Level 4: With my infinite fireballs I kill Rodrick and take his money and sword (of additional damage). Rodrick must be killed for another quest anyway, and afterwards I go to level 5 again.

* Level 5: Running past the spiders I flip the three levers to get the "Ring of Humility". Luckily the spiders did not get in my way on the way out. I plant the sapling to the south and find a 'Scroll of Gate Travel'. This teleports me to the moonstone on level 2.

* Level 2: The moonstone acts as another warp point, but instead of having to die you use a spell instead. I pick it up as well as the scroll next to it (another scroll of Gate Travel). I ready up a fireball to kill Ironwit (whose door we opened earler) and I burn his Potion of Fly and the scroll. I throw the moonstone closer to the stairs to level 3 for later and make my way to Shak who repairs the "Sword of Justice" as I sleep. I then teleport to the moonstone and continue to level 3.

* Level 3: I place the moonstone at the start and collect two talismans: The "Cup of Wonder" (from playing the song in the right place) and the "Taper of Sacrifice" (from Zak). I teleport to the moonstone and go to level 4.

* Level 4: I fireball myself to take damage for a faster death later and get the "Standard of Honor". Killing myself after, I respawn in level 5 and go straight to level 6.

* Level 6: I drop the moonstone on my way to the Golem (Who gives you the "Shield of Valor" when you defeat him). I go to a shrine which I use to level up my attack and sword stats, and also chant "fanlo" to get one part of the "Key of Infinity". I then fly to the "Book of Honesty", burning a 'Scroll of Reveal' along the way. This is used immediately afterwards to open the way to the "Wine of Compassion", which after collecting I teleport to the moonstone and go to level 7.

* Level 7: I go straight to 'Tyball', on the way using Reveal to open the path and burning a 'Scroll of Freeze Time'. I drop the moonstone just before his room, and hack at him until he dies (He is immune to magic!), taking his keys. The maze I then run past has some instant-death tiles, and others that deal a lot of damage. I run through one damaging tile and drink my Potion of Greater Heal, then flying north-west to the prison. The fire elementals below get in the way when trying to use the "Easy-move" keys, so the flight is somewhat slow. In the prison I get a picture and a key, which opens a door nearby to another part of the "Key of Infinity". After getting this I teleport back to the moonstone and unlock the door to level 8.

* Level 8: I drop the moonstone down here and collect Garamon's bones. With the Freeze Time spell active, a fireball that I cast stays suspended in the air which kills me very quickly, returning me to level 5.

* Level 5: I give Judy the picture to get the final part of the "Key of Infinity", which I assemble on my way to Garamon's grave. When I get there I bury his bones and talk to him, before teleporting back to level 8.

* Level 8: I run to the chamber in the middle and open it with the completed key. I then throw all the talismans in the lava, teleporting me (and the Slasher of Veils in the center of the chamber) to the 'Ethereal Void'.

* Ethereal Void: Taking a shortcut through the blackness, I reach the green moongate and finish the game.