Released in November 2011, Uncharted 3: Drake's Deception is the third in the series following Nolan North and his exploits under the name of Nathan Drake to become the new Indiana Jones. Just like its predecessor, it features boundless treasure in vast underground locales, beautiful vistas and a vast array of relatable characters with actual depth and realistic dialogue that you grow to like or hate, and a plot that is a skillful pastiche of adventure movies. The third installment additionally adds what was truly missing from the series: table breaking physics and the ability to have Nolan bonk an enemy on the head with a piece of fish in an open-air market. 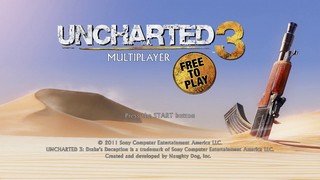 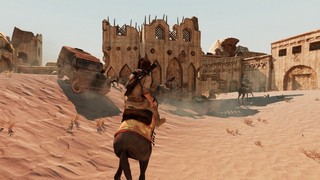 I've always enjoyed the Uncharted series and it came as a surprise when the only complete speedrun of an Uncharted game that existed was Uncharted 2 at AGDQ 2011.

I got interested in running the series due to a video featuring Justin Richmond (the game director of Uncharted 3) who talked about a speedrun by one of their testers in 3:08. With Uncharted 3 being close to its 2 year anniversary and with an advertised time to beat, I decided to run the third game in the series.

It has been common knowledge on the SDA forum that a segmented run seemed rather difficult (especially when trying to use the in game timer). Fortunately a user known as "dukope" who wrote the save system for the original Uncharted game posted on the forum and explained how a segmented run could be done. I initially wanted to do a single segment (SS) run but I was always getting one or two deaths that made the run unsubmittable.

This speedrun is played on very easy mode which is the standard (Uncharted 2 AGDQ run and the tester run of Uncharted 3). Most of the tricks won't work on any other difficulty. Almost all of the chapters use multiple segments. This is either because I need to manipulate the game for fast fights or because the method I use for an area has a very low chance of success. I have also combined all the segments into one video file and removed the saving and loading screens. This gives a much faster feel to the run since each saving and loading screen is about 40 seconds long.

Multiple segments are the reason you will see me go into the start menu after a specific event or cut scene has happened. In some special cases ending a segment as a cut scene/checkpoint starts will actually transport Nate to a more favourable location. In some situations restarting a checkpoint will also refill Nate's ammo which is useful when multiple gunfights are involved.

One big thing to note is that jumping to areas is faster than Nate's normal walking speed. It is not however faster when Nate is in "running" mode. In certain situations after a jump (when carrying a torch for example) Nate will have a very slow landing animation so it is faster to just walk normally. Individual chapter comments are below. I've only commented on some areas since most of it is self explanatory.

Chapter 2: An easy segment but it took me awhile to understand some of the jumps and ledge grabbing. There are times when you actually need to wait while hanging before attempting the next jump or you will get what I call a "fake" jump where Nate will just grab at air.

Chapter 3: Not much to say here. If you jump to the right just before they start to shoot you can skip Nate's falling on the tiles animation.

Chapter 4: The first multi segment chapter. This is primarily used so I can get a fast lock shot and manipulate the enemies to not hit me as I pass them.

Chapter 5: This is one of my weaker chapters. If I kept at it for another few days I could have easily lowered the time by another second.

Chapter 6: A very difficult chapter due to some demanding jumps and gun fights. We are introduced to the "defeat all enemies to continue" rule that will feature for most of the game.

Chapter 7: This chapter has some small mistakes but I had to keep it because I got almost perfect gun fight luck.

Chapter 8: This is the hardest chapter for speedrunning. It features 7 gun fights and 3 of the hardest jumps in the game. The second last gun fight can be done stealth but it should never be used because the setup time is longer than just getting a fast gun fight.

The last fight has 3 phases of enemies that load depending on what level of the stairs you are on. I figured out you can skip the phase 3 enemies if you go straight to the bottom and take care of phase 1 and 2. Once you dispose of them the game will load the snipers in the tower which triggers the end of the fight.

Chapter 9: The start to this chapter is very slow. Charlie will only grab you after a set amount of time. I just have some fun with him and set him up to grab as soon as possible.
You don't even need to light any of the torches in the globe room. The game just presumes you have done this after you return. I go to the furthest away crank because it's faster than waiting for Charlie to walk over. For the globe puzzle I restart the checkpoint the moment I know it is complete because I will be taken post cut scene.

The next section relies on how fast Chloe decides to run to the doors.

Chapter 10: You can manipulate Elena to open the door about a second or so quicker than usual depending on where you walk down the stairs. Moving near the door is always problematic but it went pretty well here. Fortunately the fist fight has the same trick as Chapter 1 to make enemies much easier.

Chapter 11: I segment the moment the puzzle is finished because the game inserts a checkpoint which transports Nate next to the door. This saves about 6-7 seconds.

It took me awhile to plan and find a fast route for the cog puzzle. You can skip some enemies dropping down in the gun fight if you shoot the first guy quickly. I have to wait for the last shotgun enemy to drop down because if you kill him while he is still airborne the game will not progress. I guess this is a bug since Naughty Dog wouldn't have expected anyone to kill the enemies that fast. The hallucination scene requires you to reach the end as fast as possible so good navigation is important. After the bright light hits you can stop moving.

Chapter 12: The fist fight has the same trick as chapter 1 and 10 but it is still very difficult to get a fast time. There are some very tricky jumps in this chapter. At the box pushing area I need to kill all the enemies or the game will automatically kill me just before I make it onto the last ladder.

Chapter 13: Stealth is much faster than gunning as you only need to take out 2 enemies instead of 5. The boat scene is on a timer so it doesn't matter how fast you kill the enemies. The last boat always requires 3 rocket launcher bullets so I use a segment to ensure I don't miss and waste time.

Chapter 14: This chapter is really difficult due to the gun fights. The enemies are in very unfavourable positions and it makes shooting very difficult. I don't know why you need to wait so long at the end of the main fight for the last shotgun enemy to show up. I just set myself up to kill him as soon as possible which is the trigger for progression.

The door that the enemies open is very important. I need to leave at least 1 of the 3 enemies alive and make it by without getting hit. If I don't do this the next area will have a very slow walking animation. You can however combat this by blind firing but then you alert the enemies further up which makes them more aggressive. The blind fire trick does not work on the sets of stairs and that alone can waste many seconds. I use a segment for the jump at the end because I figured out with a precise type of jump you can actually fall down and not die. This skips the small amount of climbing you need to do.

Chapter 15: The boat fills up quicker depending on how fast you kill the enemies.

Chapter 16: The jump onto the box is very difficult to pull off. Segmenting here will transport Elena right next to the vehicle.

It's required to stealth at the end of this chapter. If you alert the enemies more will come and no amount of good fight luck can make the gun fight faster than the stealth route.

Chapter 17: The plane exploding is on a timer so there is nothing you can really do to speed this chapter up.

Chapter 18: Nate walks slightly faster with a gun equipped so that is used when possible. I stop aiming when Nate talks about the well because this is the trigger for his running animation which is faster than aiming.

Chapter 19: I go out of my way to pick up grenades from the fights because I need them to destory the pillars. This is the fastest way to get the RPG-7 to blow up the gate.

Chapter 20: In the first phase you can just skip most of the trucks besides the one with the RPG-7. You need to shoot the two gun trucks to progress further. In the second phase you can ignore all trucks and just go straight up to activate the Sully cutscene.

In the storm area, rolling is highly useful as it avoids most of the damage you will take while getting to the door. I could never get to the door with both trucks intact so I took out one truck.

Chapter 21: Multiple segments are used to handle the Djinn. The Tau sniper can kill them in one shot but sometimes you can get unlucky and it will take two shots.

Chapter 22: In the fight against Talbot you can lock him into the same knife counter. This strategy skips one whole knife fighting phase.

Hopefully this speedrun has inspired others to run the series. Thanks for watching.