Released by franfistro in 2011, Unepic is a blending of the old and the new. On the surface it appears to be a throwback to the days of early Castlevania and Metroid, but it also incorporates several elements of more modern games with a leveling system, character creation, and a wide variety of items to make traversing the game's castle more varied. In addition to the overall stlye, though, the difficulty from the old days remains intact. 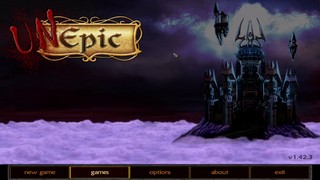 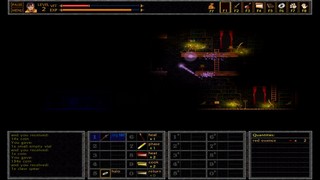 While I'm eternally sad that some points of bad RNG robbed me of a sub-45 time in this run, I'm happy enough with my own execution to accept my losses. This run is a 3 minute improvement on my previous record, despite the bad luck, which is more than I could've asked for.

This run makes excessive use of two glitches that were fixed in patch 1.42.6, and are thus only available to old versions (I run 1.42.3):
Televator: Using a teleportation skill while standing on an elevator causes some interesting effects. With a scroll, it keeps your horizontal position the same on arrival, which can put you either above or below that room. Spells, on the other hand, put you in the room below your destination, or if it's on the bottom row of the map, the room above it. Both glitches have many possible uses throughout the game, but this run only needs three Televator glitches to skip a good 70% of the game.
Infinite Attacking: Mashing the Use key after swinging your weapon keeps you stuck in the animation. For some weapons, this causes you to deal its damage once per second. Since high level weapons give a large attack speed penalty, this keeps your DPS pretty decent at lower levels.
There are a few other glitches available to the old versions, but I don't use any of them.

-The Mines-
The first 9 minutes of the run are surprisingly standard. For some reason the old versions also don't require the Mines key to open gates, which saves me one annoying room. The first part of this run runs on a global timer, since I'll have to ride an elevator which will always reach the top at the 2 minute mark, so I can waste a bit of time killing some additional mobs for experience and possible drops, and clear the way a little.

I pick up the Fire quest, as this element is vital to the completion of the game in two later areas. It's only a minor detour to complete, unlike most other magic quests, and it even pays back some time by giving me a Blacksmith's Hammer, an extraordinarilly high level weapon which I can just use to murder the first boss. Sadly it doesn't one-shot snakes, so I can't use it to murder everyone.

The Dynidon fight loses me 20 seconds by starting with an egg spitting phase, during which I can barely do any damage to him. It's not the end of the world since it gives me some free experience, and the kill on the second phase is faster than average. His death gives me the Sewers key and a bunch of gold for my first shopping spree.

-The Sewers-
Stuff I buy:
3 Heat scrolls, in order to both protect me from bats, and farm additional experience off them.
1 Zoran scroll, as a back-up strategy.
1 Phase Door scroll, mostly just to have one early. I'd love to buy as many of these as possible, but the route is very tight on money.
1 Return scroll, so I can hand in the Fire quest later.
3 Kitchen scrolls, the main ingredient for Televator glitching.

Finally, I want a Tome of Fireball, but this item can only be bought in the Sewers shop. So I'll have to make my way down there, past a Moai head (who gives me time to rearrange my hotbar), all the while breaking some barrels to get the wood to complete the Fire quest. I also start taking time to pick up valuable items in order to afford said tome. Zoidberg says hi, in his unique way, and I gain the power of Fire.

-The Library-
Now the fun starts. With all the items I need and the Fire quest completed, I execute the first Televator glitch and fall underneath the Kitchen room. Traveling around OOB, I eventually fall into a room linked to the Dragon pet quest, which leads me back into the Library. Which is, by the way, the fourth area in the game.

At this point, the whole route boils down to two things: Experience and gold. Fireball is a level 5 spell, and requires 8 Red Essences per cast. Therefore I have to level up to 5 in this area and gather between 600 and 700 gold to stock up on red essences; that's enough to last me the rest of the game. In addition, the Library has a bunch more neat items, like 3 free Phase Doors (saving 75 gold to buy), a unique Polearm that hits multiple enemies, and Ghost Form potions that make me immune to physical things.
First, however, I buy a polearm to abuse infinite attacking with, making killing these orcs a lot more efficient.

This area can cost a lot of time depending on a lot of random factors, like enemy pathing, falling off things, screwy AI... The only thing going wrong in this run is Leviathos being a bit of a troll, but that's fine.

Once level 5 has been achieved, I teleport to the Kitchen to sell all my loot and stock up on red essences, then execute the second Televator glitch, this time (eventually) landing on top of the Kitchen, and jumping straight into Medeox's boss room. Who is, by the way, the 7th and technically last boss of the game.

-Medeox-
This boss can be a major pain in the ass. His snake heads do a pretty hefty amount of poison damage, and there's 8 of them constantly attacking. This is where Fireball becomes a godsend: a single well-aimed fireball cleares the majority of the snakes instantly, and the rest follow suit eventually. This leaves Medeox with only two ways to kill me: either he can rise to my platform while I'm in the middle of casting Fireball, causing his eyebeam to instantly kill me (he's Medusa, it's what he does), or in his second phase his ghosts can occasionally knock me off the platform and get me killed that way. Luckily, neither happens.
Medeox drops a nice 1200 gold, as well as the final key of the game.

-Tower-
Luckily for my routing, the Library leads directly into the Tower. Here a pesky goblin offers me the choice of endings; I should've picked Death, not Suffering. No idea why I didn't reset right here.

Jokes aside, the Tower is the most dangerous area in the game, and also the most time-consuming. Once again, it can all be condensed down to experience and gold. I need to buy the Invoke Fire Spirit tome in the shop here, which is a level 10 spell and costs 1500 gold. The gold is not a big issue, but 5 whole levels of experience takes quite a while.

The best place to farm this is in the top three rooms, which are filled to the brim with spiders. Evil, evil spiders, that can easily stack up deadly amounts of poison damage, that drop from the ceiling onto your head, in the pitch dark. To make it a little easier on myself, I use ghost shape to run the hell past them (and also past a group of ghosts [how does that even work? why does ghost shape save me from ghosts?]) so I can open up the back door and not waste too much time when I'm forced to heal up and run back. Sadly, ghost shape prevents you from activating lanterns.

Again, a speedy clear of this part of the run comes down to skillful handling of random AIs, and it's pretty rare that I don't have to unwillingly reset once. I do get extremely close to dying just before level 10, but that was all a calculated risk. No really. I swear.

-Wizard Tower-
With my new Fire Spirit tome and level 10 in hand, I move to what will turn out to be the final area of the game. This area has a bunch of new enemies and tricky room setups, which I've mostly come prepared for. The eyeballs have two extremely annoying spells: Slow and Teleport. The latter throws you to a random position in the room, most often back to where you came from. It's nigh impossible to avoid becoming Slowed, so I suck it up and poof past them with Phase Doors. Blue wizards themselves are no threat at all, their damage is negligible and they barely ever hit me.

Next up on the list are slimes and gelitaneous cubes. Gelitaneous cubes do massive corrosive damage if you touch them, so I don't touch them. Slimes apply a Sticky Hands debuff on you, which randomly makes you drop your equipped weapon. This also removes them from your hotbar, costing even more time, so I quickly swap away from my halberd, and sit around a bit while waiting.

Red wizards, next up, can do a decent amount of damage if they hit you, but their only annoyance is the fire spirits they summon. Those can only be hit with frost damage, and they count as mobs as far as magical ladders are concerned, so more time sitting around.

Finally, the single and only reason I had to reach level 10 at all: Purple wizards. These bastards have a near-permanent projectile reflection shield, making them immune to the vast majority of spells. To make matters worse, they always hang out on high ledges, there it's impossible to reach them with non-projectile attacks. So far I've only found three spells that can reliably kill them: Midas Transmutation (which I only get one scroll for), Sleep (which is Arcane magic, and the quest to unlock it is stupidly difficult at low levels), and Fire Spirit.

To make matters worse, Fire Spirits are dumb as bricks. They only bother attacking anything if it somehow lands in their line of sight, and once they've picked someone, they never switch targets. At best, they slowly but surely seek out every purple wizard thanks to the skeletons aggroing them. At worst, they can drift around randomly for several seconds, finally aggro a wizard, and then disappear just before it dies. Oh, and they can aggro onto fire spirits, despite being unable to damage them.
Trust me, if this part of the run seems sloppy, know that this is the fastest clear I've had in any run. It can get so much worse.

-Not The Elves-
You might have noticed that at some points during the run I wasted some effort on killing those little thieves that try to steal my loot. They're actually really important to the run: Thieves can drop a Strange Scroll, which teleports you to their hide-out so you can get back any loot you might have misplaced. We're gonna need one of those, although obviously not for any normal reason. Luckily, there is always a thief at Zoran when you teleport to him, allowing me to speedily farm them until I finally get a scroll.

To finish off the run, I Televator glitch with the Strange Scroll, and fall down onto the very top of the Land of Elves. One screen to the right is the "final boss," and one screen further is the crystals that power their portal. I don't like elves, so I destroy their portal. Then I teleport back to the top of the Wizard Tower, where we find the master of the castle, who also doesn't like elves. He wants me to destroy their portal. Since I already did that, I guess that means I've beaten the game.