A car crash has left your in front of an abandoned mansion and your sibling, a younger brother on Mac, or older sister on NES, missing. When you are greeted by the undead you realise that the evil presense in this mansion is soon to consume you and turn you into a zombie. Solve puzzles and use magic to bypass apparitions, hellhounds, zombies and more while you realize that you are... uninvited. 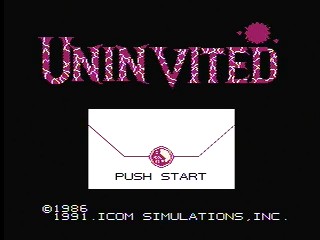 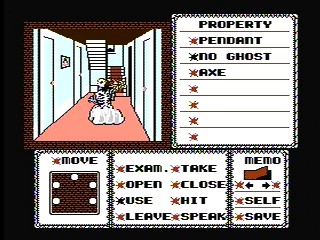 This run came together really fast. I had been looking to obtain a cart of this game for a while, but it was the most pricey of the three NES MacVenture ports. Once I finally obtained a cart and completed the game I set about running it.

I based my route off of Randil's TAS and attempted to duplicate that as best as possible. There is no RNG that comes into play in this game so it is all just remembering the best ways to move the cursor around and the order of commands.

- I open the far door in the dining room now to save having to open it from the other side later in the game.

- I use DOLLDOLL at the church entrance since I need to access the spell list anyway to cast THUNDEDE. Since DOLLDOLL is at the bottom of the list it will be the first spell my cursor hits when moving from USE.

- Once locked in the bathroom, the real purpose of the game is discovered. There is a shelf and I need to find out what it is made of. So after turning on the faucet, I examine the shelf four times. The game repeatedly tells me "IT'S A MARBLE SHELF," but I continue to be unsure. After the fourth examination, it is underwater and the chance to be sure of what it is made of is gone.

(Actually, examining the shelf yields the shortest text, so it is faster to do so.)

Mistakes:
- My cursor movement certainly was not perfect. There were a few times where I needed to do and extra tap because I came up a little short. Just minor errors here and there that did not cost a lot of time.

- There were a few places where I was a bit twitchy and hit the action button an extra time (after opening the safe and after picking up KEY2).

- There were also a few places where I either forgot to cancel the selected command or the game did not register my input and it took me a moment to realize that. This resulted in me attempting to enter a door, but failing because I still had a command selected. (Greenhouse and that KEY2 room)

Overall, my execution was pretty good and I did not lose much time despite those more major mistakes. Sub-12 is definitely possible, so I am not done with this, yet.

Thanks go to Randil, for the TAS of this game, Emptyeye, for his Deja Vu runs that motivated me to get cracking on this game, Boxfat, for recording commentary with me, and all those who watched me stream attempts and stuck with me despite my repeated resets after botching the first cursor movement many times in a row.