The long-awaited follow-up to tri-Ace's 2000 Playstation cult classic was finally released in September 2006, as a prequel of sorts to the original. Valkyrie Profile 2: Silmeria features a revamped tactical battle system, a "break" system for collecting items, and the addition of photons and sealstones for new platforming puzzles. Silmeria, the youngest of the three Valkyrie sisters, has been banished by Odin into the body of Princess Alicia of Dipan. Together, they decide to join King Barbarossa in his fight against the gods. 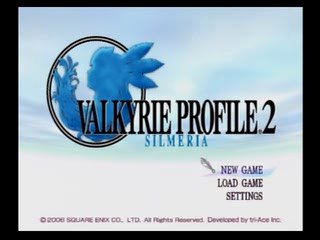 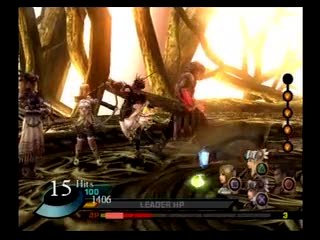 Before I get to discussing the game, let me share a little about my experience with the Valkyrie Profile series. I knew a little about it from discussions between members of an old forum I used to go to, but the most notable thing I heard from THOSE discussions was that it was one of the most expensive games to find. From there, I didn't know much more until Josh posted his original Valkyrie Profile B-ending run. It was at that point I actually read some more about the game and found out quite a bit. (I have not actually played the original, but thanks to FAQs I have a decent amount of knowledge on it.)

The rest of my family found out about this game through a quite humorous incident. While my mother tried to play some of her music from my computer one day (I think it was during Thanksgiving weekend in 2006), she accidentally turned on music from the original Valkyrie Profile that I'd acquired a while before. On full blast. (I think the specific music piece was "The Joke of Truth", which plays during the Surt fight in the original.) I later showed her part of Josh's original run (the Surt fight specifically) and she commented that the game kind of reminded her of some of the 'books on CD' she listens to. Yes, an essentially 'book geek' and a 'computer geek' can have interest in the same subject matter.

Anyway, flash forward to Christmas. My brother had no idea what to give me, and he thought this game would be something I liked, so he got it. Oh, I was ecstatic. Among the things I got from my parents, I got a DVD recorder (took some adjustment, but let's just say it's helped). It wasn't much later that Alkaiser's run got posted, which I refused to watch fully until I completed the game. At first, I thought improvements over his run were minor. THEN tri-Ace Fanboy learned more about how the battle system worked and spilled the beans on it. Eventually I made a practice run, which got stuck on Arectaris.

Fast-forward roughly to late April, where Enhasa spoke up and provided a lot of notes. A lot of small notes, but the two that helped the most were a different Audoula route (this note I actually disputed with him before I tested it and found he was right) and a different Forest of Spirits route (I didn't question this one at all; I questioned OTHER Forest of Spirits stuff). Not much later, tri-Ace Fanboy made a suggestion regarding the Brilliant Peacemaker and Dragon Rib accessories, listing a specific setup against Dragon Zombie to demonstrate. One of his details on that setup turned out to be quite the bombshell, but I didn't find that out until I restarted my test run. Further details on the run strategy were not fully established until the test run and a half were done (that's right, my final test run before recording only went partway).

Anyway, if you want to read more on strategies and stuff, an entire topic exists. My serious entry into the topic is around the bottom of page 5.

As for the run itself:

I'm going to keep it brief for reasons that are explained a bit later. This is a segmented run of Valkyrie Profile 2 that beats the last published run by over 20 minutes. I can sum up the improvement in the following ways:

You'll notice that nowhere in that list is 'improved platforming skill'. I am mediocre at best as far as the platforming element of this game goes. And I definitely want to say that the previous runner, Alkaiser77, was WAY better at photon transfers than I ever was. You're looking at my better attempts.

Rather than spoil everything, as this is one of the few times I've beaten someone else's record and I want to savor the moment rather than write a book about it, I'm going to make short notes. But first I have some people to thank:

I'll note some things that I think could be improved:

And that's all. I've been discussing plans for a single-segment run of this game, but I wouldn't do it for a long while because I've got other games I need to finish.