Released in September 2004, Warhammer 40,000: Dawn of War is a real-time strategy developed by Relic Entertainment. Featuring 4 different and unique races, an epic single-player campaign, successful multiplayer, cutting edge visuals and intense battles, and some new elements to the genre, like fatalities, the game quickly conquered the hearts of gamers throughout the world and became one of the most-praised RTSs of its generation. 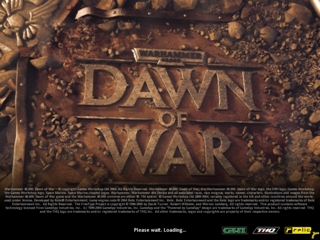 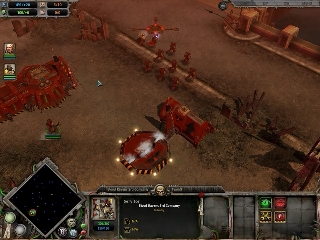 Individual-levels run on hard difficulty in 2:06:57:

I've chosen Hard difficulty because friendly and enemy units have standard number of hitpoints. Unlike Normal where you got more poweful units and Insane where those are less powerful, compared to enemy units.

Whole campaign is pretty much straightforward, especially the first half of it, with very few shortcuts. As the whole run doesn't need much explanation, I'll cover only the most important aspects of each mission.

Those annoying Autosaves can't be disabled and are kept in the videos as they are included in the total mission gameplay time.

On all Missions where destroying enemy bases/structures is required, the turrets are never part of these objectives and can be left alone, the only exception being the beginning of Mission 2.

Deleting your own structures is a good way to instantly get a big amount of resources, so I'm using this feature throughout the campaign, as much as possible.

Destroying banners in the first Ork camp isn't required, but it will prevent the future marine squads who will pass nearby, from taking critical damage.

Deleting scouts triggers the immediate arrival of the marines. As resource income is pretty low on this mission, I'm forced to kill banners to save the marines from taking heavy losses.

Since the beginning there is plenty of resources and units available so there isn't much to explain. Just build an army and steamroll all ork buildings.

Squiggoth is kept shut down by Skull Probes, so it can't move, or fire its weapons.
Despite how it may appear, the main enemy on this mission isn't Squiggoth, nor Warboss, but those tanks at the bridge as they are very devastating against infantry.

The Eldar on this mission lack anti-vehicle units and instead are focused on anti-infantry ones, so the obvious choice is Hellfire Dreadnoughts spam. They do great damage at a distance, and are very resilient in this particular mission.

Going asm allows me to avoid fighting with eldar vehicles on the mountain pass approach, and to delay the spawn of the eldar army during final encounter, by jumping over the trigger.

Less than 8 Land Speeders will be outgunned by Dark Reapers and Wraithlords at the monument, so I take some time to gather the needed amount of vehicles.

Gather as many Land Speeders as possible, then destroy the objectives avoiding unnecessary encounters with chaos forces - that is all needed to be done here.

Destroying Chaos Temples is necessary to stop chaos infantry spam, which will, otherwise, overwhelm any army I could build during the time of this mission.

Although the objective is to destroy all chaos forces, killing the turrets isn't required for successful mission completion.

The mission begins with a big army of marines available. All that I need to do is upgrade those marines and taunt Daemon Prince so that he will expose himself to the missile fire.