Released in October 2006, Warhammer 40.000: Dawn of War: Dark Crusade is an RTS developed by Relic Entertainment and a second stand-alone expansion to the original DoW. Dark Crusade introduced 2 new races, new campaign, new units and whole bunch of new maps available for multiplayer and skirmish battles. The game gave players unprecedented choice of playing as one of the 7 unique factions, makng it one of the deepest and most complex RTS in the genre. 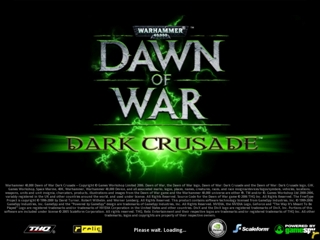 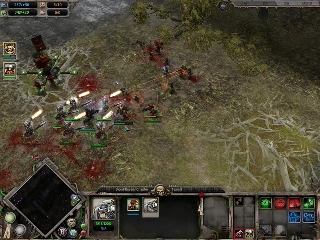 In order to complete the campaign, all enemy strongholds must be captured. There are 6 strongholds at the beginning of the campaign. The factions may fight on a global map, between them, without direct intervention from the player. I'm using this feature by spamming the "End Turn" button at the beginning. The results of this action aren't predictable as the enemies movements are very random. It took few dozens of retries before I got the desired result - one faction remaining with only 3 provinces to conquer.
All missions, except the last one, are basic skirmish fights against two opponents. The victory condition is the destruction of all enemy HQ buildings. The last mission, however is different, in that it's a scripted storyline encounter.
I complete all missions with basic strategy known as "fast GK" in which I'm building Grey Knights as fast as possible, along with Chaplain, and then rushing towards the enemy bases. The last mission required more than GKs, as I need to make my way through heavily defended guardsmen in order to reach the IG HQ. I'm forced to wait for Tier 3 to get Terminators and Deep Strike them right at the enemy base.