Relic Entertainment released in September 2005 the first of three expansions to capitalize on the success of Warhammer 40,000: Dawn of War. Winter Assault built on the vanilla game by offering a fifth playable race, the Imperial Guard, two five-mission single-player campaigns, and by adding additional units to and rebalancing the four original races. For many players, however, it's more notable for confirming universe flavor: yes, the Imperium purges the xenos primarily by sending in hordes of cheap expendable men with laser pointers. 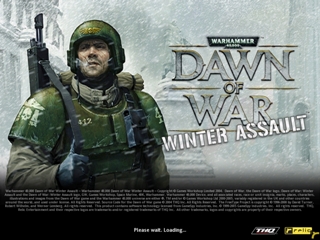 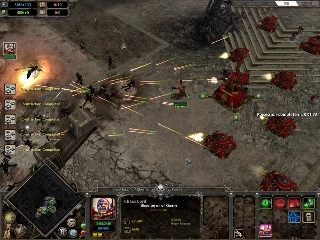 Mission 1:
In Eldar part, the strike force may be respawned endlessly so it is faster to kill and respawn the new units at desired location than to move the existing ones via webway gates.

Mission 2:
No infantry units needed in Eldar part as the Sentinels kill all ork vehicles before Dark Reapers or Banshees could even reach them.
Even after race switch, overwatch command still works on IG side, so that Sentinels can be built without interruption.
Notice that the Sentinels can only be built at the original Mechanized Command.
Due to the small micro error, I left an idle Basilisk till the mission end which resulted in one less Sentinel for the final battle.
Also, killing chaos turrets isn't required to finish the mission, but it helps alot for the guardsmen.

Mission 3:
I issue moving orders to rangers during first Autosave with my mouse, but Fraps can't record mouse movements during Autosaves, thus it may appear confusing.
There is a resource bug in IG part which causes requisition and power income to be very low no matter how many strategic points and generators are in my possession.

Mission 5:
Killing IG will allow the positioning of Bonesingers near titan weapons, so they may start to entomb those right after the 2nd Monolith appears.

Mission 2:
Ork Bigga Generator starts to take damage only after appropriate objective appears, thats why my raptors take some time before attacking it.

Mission 3:
There is a same resource handicap for Chaos just like in Order Mission 3 for IG - resource income is very low compared to what it should be.

Mission 4:
Getting any unit past the Psychic Gate, automatically triggers the mission completion, so it appears to be unnecessary to do any of the main objectives.