Werewolf: The Last Warrior, released on the NES in 1990, is a challenging platformer about some guy who can change into (guess what) a werewolf. Dr. Faryan and his band of bio-monsters have imprisoned the world's population, and the only thing that can stop them is some hot furry mano-a-mano action. The werewolf is also helped by some hobo, but then he dies. 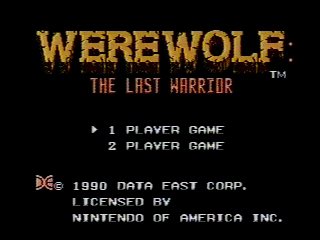 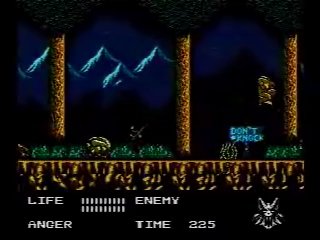 This is my 2nd version of a Werewolf speedrun. This is about a 4 minute improvement to my last run! Wow... but there are several reasons for this. My first run wasn't completely horrible, but it had more mistakes than this run for sure.

Before I did this speedrun, I was working on a tool assisted speedrun (TAS) of this game. So basically, when I went though the game, I managed to find TONS of glitches. The most game breaking things being:
- Infinite Super Werewolf glitch!
- Being able to skip some minibosses

With these things being possible, all the bosses became extremely easy or I could just skip them. Anyhow, here's a level by level comments:

Level 1 - I start off messing up the boss battle and lost a few seconds, however, I make up for this by pausing correctly (saving 2-3 seconds) when performing Infinite Super Werewolf glitch. This is done first by "duplicating" and item the red W, and then grabbing two of them at the same time. I need to hit the red W, scroll the screen forward, and then go back and hit the red W again and collect them. You stay Super Werewolf as long as you don't take too many hits + don't collect any "anger" items. I had little mistakes, but I managed to skip the miniboss.

Level 2 - There really aren't too many mistakes here. I skip the miniboss in this level as well. Oh, and this is done by basically jumping over the boss' spawn range. Super Werewolf just barely can do this with his super jump.

Level 3 - I skipped a miniboss in this as well. The lower path is easy/faster if you're skipping that boss anyway. Everything went well, the boss fight against fire man was extremely quick because I was Super Werewolf.

Level 4 - I got really unlucky here. At the start there are certain ways you can jump or slow down to avoid some enemies from appearing. Still, I was a bit cautious as everything here can kill you. I can only jump a very high height when playing as Super Werewolf, so avoiding enemies and their projectiles sometimes becomes problematic. I HAVE to kill those enemies sometimes, otherwise I'm certainly doomed. I took quite a bit of damage from the first half of the level, so I was cautious at the end fight. Killing the boss was very slow because he was at the top of the screen when dying. I've had problems with this boss coming down and hitting me OR not coming down at all for a long time. I figured killing him quickly would be the best option. I think it was. Otherwise, I may have lost my Super Werewolf ability and it's crucial for the final boss in the game.

Level 5 - the enemies here are pretty tough to avoid. I had some difficulties, but it was fast. The final boss went basically perfectly. I could have done a powered up "hit everything on screen" move, but then I would have risked the boss (2nd form) changing his movements. As Super Werewolf, this boss fight goes about 3 times faster than as regular Werewolf. I probably saved a minute here alone.

Overall, My run was pretty nice. I only really had troubles in level 4, and they were pretty minimal. Performing all the glitches and avoiding transforming the whole game is tough. I could probably improve this by another 20 seconds or so, but it would take some luck.