Released by Rare in December 1987, Wizards & Warriors is the first of three installments in the classic NES series of the same name. Controlling the knight Kuros, you're given the chance to run around and do knightly things such as finding treasure, slaying foul beasts, and rescuing damsels in distress, all the while on a main quest to defeat the evil wizard Malkil and save a nameless princess. 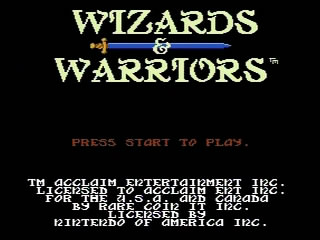 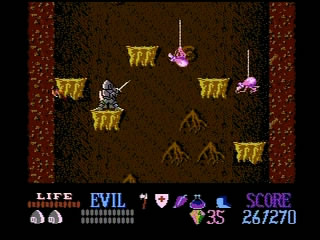 Hello. Here are my comments for my Wizards & Warriors speedrun.

I use the glitch to warp back to the first stage. So all stages aren't played in this speedrun.

I feel like this speedrun is quite solid considering nobody had speedrun this game before. The reason for that is most likely all the planning needed.

I won't list a level by level analysis because most of the levels have similar gameplay. Instead I'll list a FAQ answering whatever you might be wondering, in a sort of chronological order.

Q: What are the effects of potions?
A: Blue potion increases speed. Pink potion increases jumping height. Red potion gives invulnerability. Some potions appear on fixed places, so they can be strategically picked. Most of the time they're random drops from enemies.

Q: Why do the damage boosts look sloppy?
A: Enemies are very random and unreliable in this game.

Q: Why are the damage boosts used? How? Does it save time?
A: If you land with the back of Kuros' feet on an enemy, you can bounce from the enemy. Two damage boosts are used in this speedrun, both in the first stage. First damage boost is for grabbing the pink key faster. Second is to skip climbing inside a tree, which takes forever.

Q: What are Boots of Force used for?
A: They can open chests without having keys. Also massive damage against bosses.

Q: Why do you grab Shield of Protection?
A: It protects me a little. Also when I visit the stage again, the chest can be grabbed for easy 21 gems.

Q: Why do you suck at killing bosses?
A: They behave randomly. Also when Kuros has taken damage, he can't attack anything for a brief moment.

Q: What is the Feather used for?
A: It gives me a smoother movement in a lot of places. But it's mainly picked up for stage 3B. There is a jump that cannot be made without either the feather, blue potion or waiting for a bubble to rise. Feather is a reliable solution, and fast. Ridiculous luck with a potion would be faster though.

Q: Why did you slow down before you got the Feather?
A: Those jumps are hard to do. And they have to be done this way (jumping on the ledge, and jump again).

Q: What is the Bottle of Levitation used for?
A: It makes me able to do higher jumps. Abused a lot in this speedrun. Also the warp glitch cannot be made without it.

Q: Why do you get the Axe?
A: It does more damage than the Knife, and isn't far away from the necessary route. I feel like it saves some time.

Q: Did you just jump through a wall?
A: Why yes, I certainly did. There isn't more detail into it than what it looks like. Easy to do. It saves a few seconds.

Q: How does that warping glitch work? Does it save time?
A: It's possible to enter the first stage again by tapping UP repeatedly at the edge of the screen. Since the game only counts how many distressed damsels you've saved, it's possible to beat the game without completing all the stages. A distressed damsel is saved no matter what stage you beat, even if you've beaten it already before. The last stages are very long, so going through the first stages is a lot faster (and easier).

Q: Is this run improvable?
A: Yes. But there is a lot of luck involved, especially in the first stage. Only about 6% of my attempts passed the first stage. Mostly because of bad luck. It's kinda tiresome speedrunning this game, so I just submitted this run.

Q: Will you ever improve your time?
A: Unlikely. Eventhough I like this game, I don't like speedrunning it. I got sick of it quite fast.