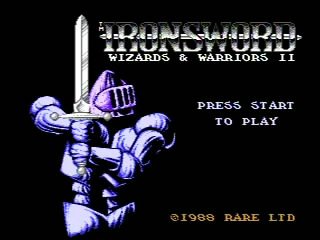 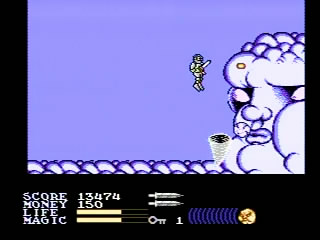 This one is tops on my list of annoyingly hard games (can anyone say "collision detection?"). If this wasn't a Wizards and Warriors game, I wouldn't have given it a second thought. But, since I happen to enjoy the other games in this series, I had to at least beat the game once, just to say I did. What you see here is that one time.

There's a glitch employed by the emulator people that allows you to bring keys, magic power, and "elemental spells" past the end of a level. I don't use this trick because I think that this is cheating (plus, it's banned by TG). You're supposed to start each level without the above items because that's what normally happens when you collect a piece of the Ironsword. This is important because having the extra stuff allows for some HUGE shortcuts on some levels that are supposed require the collection of new items (ex: getting the Golden Fly in the forest level without the Waterspout).

That aside, this run has a bit of room for improvement, particularly the last battle, where I accidentally get stuck in the subscreen with no spells (the darn thing takes several seconds to tell you that you're empty-handed!). I also get bounced around quite a bit by the last boss(es). Who knew that they were powerful enough to hit you from the other side of a mountain? :)

The big problem with this game is beating the last boss fast and consistently. However, I finally found a way to do it. If you're not familiar with the last boss, they are 4 elementals in the shape of balls that fly around the top of a mountain. Each elemental will fight you one at a time, while the other 3 just hang around at the top. The problem is, if you just climb to the top of the mountain and just shoot at them, they'll run into you, sending you flying all over the place. However, if you hit them early on in the battle, you can position them in a way where they won't run into you as often. I died early on in the fight, but you'll see that after I respawn, I wait in a spot to position them the way I want.

Even though I made a few minor mistakes throughout the run, I executed so many things flawlessly getting me my first sub 9... and a ridiculous time at that.

Comments on the stages:

Wind stage: The only hicup here is that I bumped into a tornado making me lose about 1 second. Honestly, with the amount of RnG this stage has, I didn't mind.

Water stage: This went almost flawlessly. I accidentally entered the secret room in the treehouse, but besides that, everything went great. For the Water Level boss, normally if you have the spell that corresponds to that level's boss, you'll take very minimal damage. But if you don't have the spell, you'll get knocked back and take huge damage. I was lucky to not have this happen to me. As you automatically exit the level when the water boss dies, the white water waves above can still knock you back making you lose countless seconds. But I was fortunate enough to avoid this.

Fire stage: This went very well. Almost nothing to really nitpick at here except trying to leave the dragon's room before I even talked to him.

Earth stage: Believe it or not, the first part of this stage can be a real run killer. I luckily didn't get any bad ghost spawns which can 1 shot you. I also took an unlucky death from a bat. Besides that, it went well. The glitch about assembling the Iron sword can be found below.

Icefire mountain: In the first part, there's a way to skip a platform with a coin on it all the way at the top. I tried to bypass it by saw I wasn't going to make it, so I just climbed normally. Then in the green cave before the final boss, I learned a new and faster route but requires some precise jumps. And then for the final boss, I beat him in about 51 seconds... without the quick kill technique. A quick occurs when you kill the final elemental while they're far off the screen. The game instantly fades black and cuts to the final seqence saving you about 4 seconds.

Here's a list of glitches used on this run:

Infinite magic - a very simple glitch. Filling your magic bar all the way causes your magic meter to be refilled when you consume it all. This happens infinitely.

Keeping your magic spell between levels - you'll notice at the end of each level, I run to the cave at the right, then shoot the Iron Sword piece. Doing this skips the sequence of racking up your points and allows you to keep your spell for the next level.

Getting the Iron Sword glitch - normally after you beat the Earth boss, you collect the final Iron Sword piece and it says "You have assembled the Iron Sword". The problem with this, you cannot skip the "I gots an item!" song and have to wait an extra 4 seconds. So I use a glitch here where I run up to the cave exit, press select to bring my magic menu, exit it, and at this point it'll display "Assembled the Iron Sword" message. Now, I'm able to skip the "I gots an item!" song half way through saving those 4 seconds. There is in fact a way to skip the song normally without this glitch, but I haven't figured out how to do it consistently.

Re-jump: This isn't really a glitch but a clever use of mechanics. If you jump twice, you'll keep your horizontal momentum allowing you to jump farther. You can also use re-jumps to jump mid air off a platform. Think of it like Donkey Kong Country jumps lol. If you were to normally run and then jump, your character loses his horizontal momentum for a brief moment.

I think that's it for now, hope you enjoy!