Released in April 2006, Wolfschanze 1944 is based events from World War II. Take control of Claus Schenk von Stauffenberg as he tries to take out Hitler. 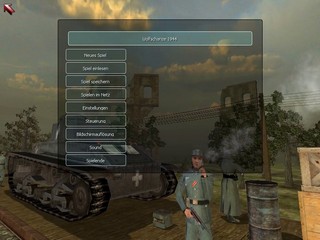 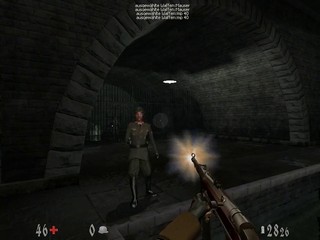 Flying - Similar to flying in Half-Life 2 but much easier. You don't need any macros or scripts, you can even stand around in mid-air and you won't fall down. Pretty much the whole run is based on shortcuts being taken by flying out of bounds around. Flying won't work with too small things or with huge stuff like parts broken off of walls that are sometimes laying around in ruins. I consider this a "large-skip glitch" because it often simplifies the whole speedrunning strategy to "move from point a to point b" and some levels like level 4 or 5 would be much, much longer without it and/or contain a lot more fighting (there's barely any fighting in this run at all).

Out of bounds - You have to search for gaps in the skybox of open area parts of the map to get out of bounds. If you enter the skybox of another part of the map you can't just get back from where you came, so often you have to move around these parts. I.e. in level 2 I had to move around area 2 of the map to get to area 3, where the exit is. Sometimes taking the out of bounds route is slower than just walking straight through the level in-bounds or i.e. in level 18 using the motorcycle in-bounds is faster than flying out of bounds because flying is as slow as walking. Also, navigating through out of bounds can be a nightmare because often you're flying around blind. You need to memorize your position in the level and you have to imagine the position of your destination. And often you have to count the seconds while you're moving forward to be able to turn around left or right in the right moment.

Save-glitch - The save-glitch allows you to skip speeches. When someone starts talking, save and then reload. He stops his speech and starts the next sentence. Reload the same saved game again until you skipped his last sentence. This way I was able to fasten up some of the annoying cutscenes that I couldn't skip otherwise.
This video might explain how the save-glitch works: http://www.youtube.com/watch?v=Ix9XK1VV_MU

Hiding behind a box - I was using this in level 3. It's only a small trick. If you hold a box or something else in front of you, enemies can't see you any more and so they won't shoot at you.

At the end of level 18 I was clipping through the door. Just stand with the left side of the motorcycle near the door and leave the bike. You'll be on the other side and hit the level's exit trigger (similar tricks were used i.e. in Half-Life 2 or Halo Reach).

There's a small trick in level 20: Hit the first guy a few times without killing him and the door to the next room will immediately open. Saves a bit time if you don't have to manually open it.

Tricks I didn't use:

Death-abuse - I you die and then hit the level's exit trigger (i.e. if you fly, fall down and hit an edge before you hit the exit trigger), you'll start the next level with 0% health. The bad thing about this is that you can't fly with 0% health (it screws up the collisions with boxes and similar things or something like that; you can i.e. just walk through boxes as is they were made of air) - the good thing is that enemies won't recognize you because they think you're dead or whatever. But you will keep your weapons and you can still use them and if you start shooting they won't shoot back. You can end this state of being "undead" if you just pick up a medkit (you have to press "use"; you won't pick up one if you just walk on it). Since you can't fly as an undead this glitch was useless to me. But it might be very useful for a no-flying speedrun.

Texture-bug - I don't know how to call this glitch. If you fly out of bounds above a hallway or room, the only textures of this room that are visible are papers laying around on the ground. If you fall down into the room below you, all the textures in it will become visible. You can save while being in mid-air, fall down and then reset. After this the texures of the room below you will be visible. But I didn't want to use any unnessecary segments and I was always able to navigate without the use of this trick. There's exactly the same glitch used in the last level of the segmented Halo 1 speedrun.