In December 2008, World Molder was released as an indie game on the Xbox Live Arcade. As advertised, the player is able to use his/her abilities to alter the shape of the terrain to solve puzzles and reach the exit. As you might expect from a low-budget game, glitches aplenty are available for speedrunning purposes. 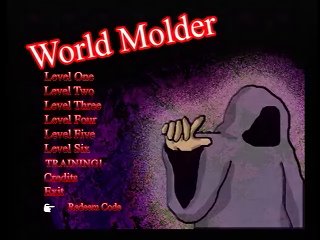 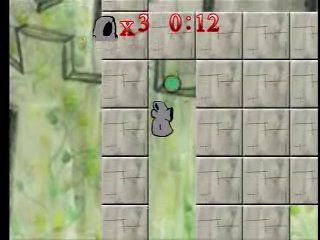 World Molder is an Xbox 360 Community Game, built by LagunaCloud and Krazystyle with speedrunning by level in mind from the start. Their vision includes creating unique concepts for the sequel- and clone-cluttered gaming marketplace, and I think they succeeded here.

They actually left at least three big glitches in the game on purpose, glitches that can be exploited to finish levels much faster than otherwise possible. In addition to molding the world around him (not a glitch), the 'character who looks suspiciously like the Grim Reaper' can jump in the air once while falling, climb up some walls, and (most enjoyably) teleport a bit by squishing himself. I sure have no problem with that Smiley but some people might not like that 'krazy' style.

I learned these levels by myself for a good while. Then Telixion, the game's top player, released a video of his strategies in every level. I learned so much! Before watching his videos I was never scaling walls without molding over and over. I learned numerous other things too. Watching his videos helped me take my times down by at least a minute total.

Feel free to enter the game creators' speed contest for this game if you want, at LagunaKrazy.com. They give away 1600 microsoft point cards, and maybe even the chance to design levels or join the beta for their future projects. Just know that Telixion is hard to beat!

Thanks so much to Telixion for all the help; I hope he sends SDA improvements to these videos. Thanks to Nate for encoding these videos, as well as the strategy video I asked him to put on YouTube previously. Thanks to mikwuyma, Enhasa, DJGrenola, the verifiers, Radix and others for their great contributions to SDA over the years. And thanks to Laguna and Krazy for creating such an enjoyable, competitive game!