Simultaneously released world-wide in December 1992, developer Sega AM7 R&D brings you World of Illusion Starring Mickey Mouse and Donald Duck, a classic 2D platformer featuring two single-player and one co-op story. Our beloved Disney friends venture into other Disney worlds 10 years before Sora did in Kingdom Hearts. Will they be able to escape the evil Magican's realm in order to perform a magic show for their friends? 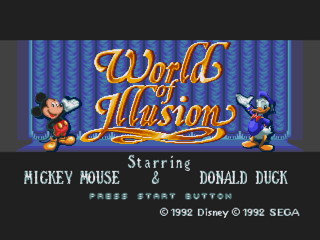 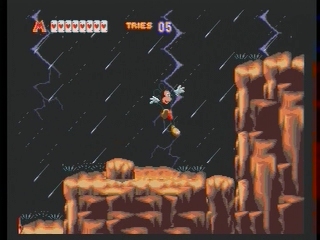 I manipulate enemy and boss patterns with resets between the runs. It's not 100% reliable but the first few runs will 4 out of 5 times feature the same patterns. (This is actually a huge part of the run.)

I try to get speedboost from timing my jumps on the very ledge of platforms. 4 out of 5 jumps are totally risk free, but some of these jumps will result in death if I miss them. Some save a few frames and some save seconds.

During stage 1-1 you ignore gravity if you jump at the precise moment when the "jumpything" shoots you upwards. The fastest way to get to the top is to hit the first and then then second you land on. This however is extreamly difficult. Second fastest method is to simply hit the third, (this might be -1 second difference. I havent timed it but its not much). Anyways this is the biggest timesaver in the entire game.

1-1 This level is perfect. Got the jumpglitch, minimal slowdown. I'm happy. Life's goooooowd.
1-2 Got good speed on the first momentumjump, the second didnt happen. Lost +1 second here. But it's still good.
1-3 No complaints here. Got the ledgejump from the webspawning spider if I remember correctly. Life's good.
1-4 Spider boss co-operated. This was one of the first runs of the segment so I knew that there was a high probablity that he would appear in the top left corner for the final hit. Life's good.

Level 1 comment: At this point I was beating my recond for this segment with 0.8 second. That record was set with perfect execution on the first 3 parts but the spiderboss decended to the right...

2-1 Autoscroller. Life's good (I like this carpet ride)
2-2 This was good, no misstakes from what I can remember. Life's good.
2-3 This segement has killed soooo many good runs before. The platform can appear in either of two places. This time... As you might guess ---> Life was gooood.
2-4 Missed one of the momentum jumps. (-1 second). But the birds behaved, they will usually hit you just as you will enter the Dragons room and you can't avoid it! Either you take the hit, or you duck. Either way you lose! This stage overall made me happy and life's still good.
2-5 Easymode. Life's good.

Level 2 comment: Still ahead here. This stage is the easiest in the entire run. But there are some tricky jumps in 2-4 if you want max speed. Actually I played it somewhat slow here, did not want to risk the run for 0.5 seconds.

3-1 This stage is the hardest in the game! It might not look it. But keeping your momentum is a bitch. If you lose it, you are done and might drops up to 6 seconds. There are way to get it back, but they all involve stopping and staring and it's lose-lose. Though life was good but my speed was not 100%, more like 85% the last couple of seconds.
3-2 Duck duck turn and pose!
3-3 Ledgejumping was good here, you can make it better. As you will notice the damage takes is intentional. Ducking while taking damage is good because you can still move freely and not get imobalized for a second. Life's good.
3-4 This stage was bad, lost a few seconds here. It's was all my execution. No excuses. Missed jumps, came out of crawl too early and missed to crawlboost here. Jumped when I shouldn't. Life still good though.
3-5 Shark shark (Actually if you translate it to Swedish it's "Hello Hello"!) Life's good.

Level 3 comment: At this point I'm behind my best time. But only by a little. And I will recover!

/** Level 4 comments:
* 4-1 Small little notice about when Mickey swims out of the sunken ship. If you ascend straight up you will trigger the event which
* throws you out of the water. Anyyyyyway! This stage is awesome, very cozy and well executed. If the co-op TAS Mickey and Donald will ignore
* gravity when bouncing of the staplers. This is not me failing to do any trick here, I just haven't been able to
* reproduce it while in singelplayer mode, I think that glitch is related to the two players calling each other for help when off screen.
* Life's goowd.
*
* 4-2 Candy land! This stage is totally different in the jap release. Which is strage to me, since it looks like crap and all the cool stuff
* has been replaced with tiny platforms which makes that level totally broing. Good thing this is the US release. This stage is very very well
* executed, one momentum jump (I think) when jumping off the boat, and several ledgejumps. This stage might not look hard, but it has killed many
* runs. Due to the clouds, they have very strange boxes, if you don't make the landing perfect, you won't get enough height in the next jump and boom
* run is over.
*
* 4-3 Autoscroller. I just pick up the cake, giving me full life again which I might need for the last stage. Music is nice, Mickey gets a hat.
* Life'e good.
*
* 4-4 We are actually back in 4-2 but whatever. This is perfect, no misstakes whatsoever. Life's good
*
* 4-5 The witch. This is a strage fight. Her pattern the first seconds are always the same. And if well executed, she will never survive it. However.
* Her invincibility time varies. And there is no logic to it! I missed the second blow with a very very slim margin. However her pattern was helpful
* and she didn't dodge the final hit and I only lost 0.5 seconds here.
*
* Stage 4 comment: Totally rad stage. Only misstage was the bossfight, and that was even better than most fights!
*
*/