Released in October of 2003 in Europe and in March of 2004 in the United States, Worms 3D delivers exactly what it advertises - the ability to blow the crap out of everything in sight.. in 3D! All of the goofy weapons return in this Worms installment, wherein as many as 4 players can compete at the same time! 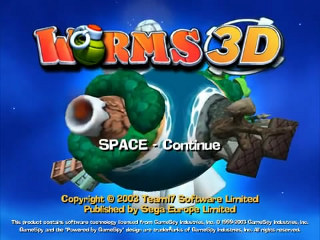 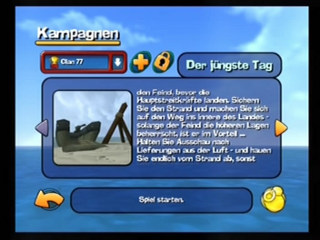 Note: The times on the statids are incorrect.

This is my Worms3D speedrun.

It is my first speedrun but I hope and think that it will be followed by other ones after Tigger77 and I will have finished our Valkyria Chronicles run we're working on now. Tigger77 was the one who focused me on speedrunning because I was involved in the planning phase of his Link's Awakening run (which isn't done yet :o ). Because we had not enough energy to play Zelda all the time and 'normal' gaming became more and more boring, Tigger77 supposed that I should start an own speedrun project for some variety. So I looked for a game which I always liked and in which I have enough skill to crush it. Now, when I've finished my run, I know that I was definitely not high-skilled in Worms3D that time. It was really good for that I chose an IL-run what makes things way easier and avoids a lot of frustration.

I'm very happy about finishing this run of a game which is still one of my favorites (yeah, really). And now I want to give my thanks to some people:
- Radix for creating SDA
- The team of SDA's moderators (for moderating SDA)
- Tigger77 for bringing me the idea of a Worms3D run and for some insane and frustrating tactics. (but they were faster <.<)
- A guy who changes his nicks way to often but who appears as 'FLEA' in my Clan77 team for playing a lot of nice and funny Worms3D matches against me which improved my aiming skills and my tactical abilities.

So here are the comments for the individual levels:

Level 1:
It's awesome. The grenades in this level are hard to perform and obviously the second one should kill the worm it hit.
But luckily that didn't happen and so the two enemies blew themselves into death what means that I need only three turns to win.
The resulting time should be unbeatable if you don't have a plan which is extremely demanding on luck.

Level 2:
Nothing much to say about this level. It's quite a solid one. I just wanted to finish it with my first turn and that was no problem. There was the idea to reach the final-box with a dynamite-jump, but I think it's impossible.

Level 3:
I think this level is just boring. The only "trick" is to open two graves at once. My aiming is a bit lousy but the time is ok...

Level 4:
Now, when it's finish, I love this level. But it was so painful to get this.
The plan for that is absolutely insane. It begins with that fast turn by the worm called '-M2-' which kills in fact three of the enemy's worms.
The first one is directly shot into the water, the second one is shot to a deeper place where he'll die when the water level increases and the third one is manipulated to attack my worm, so that he stands on a lethal place, too. After that there are a 'double kill' with the rifle and a nice grenade; the rest is done by the water. But the luck it needs that all happens like this is just ridiculous. I'm very sad about that mistake at the end, but this is still my favorite level.

Level 5:
This seems to be an easy one, but I swear it was one of the hardest levels in this Worms3D speedrun. Every time I tried, there were only one or two seconds missing, but there were no mistakes so that I thought it was impossible to get this in one turn. But then Tigger77 found a new way to get down that hill at the start and so I finally got it. Stryke!

Level 6:
I like the plan of this level. It starts with a really nice grenade and ends with a sick sheep-action. The rest is nothing special but I'm sad about that mistake at selecting the sheep which costs maybe 2 seconds and looks really stupid <.<

Level 7:
Just a jetpack mission. So what?

Level 8:
Very stylish level, I think. Taking the first box with that jump down (which isn't easy as it looks) saves a lot of time. And all other turns are also fast and nice kills so that both planning and playing this level's run were really fun.

Level 9:
Well, it's the shortest level of Worms 3D and in this run. I think this level's time should be the optimum. Using the fire-fist saves maybe two seconds and I've absolutely no idea how to be faster. So I'm really happy with my result.

Level 10:
Nice level. My aiming was ok and the enemy's turns are fast without damaging me or that noob on top of the slide.

Level 11:
No problem to finish this in one turn...

Level 12:
Mh, I don't like this level, but it's played fast and the enemies do as expected: Shooting quick and hitting nothing.

Level 13:
That's a nice one. I like the fact that I don't need to collect the platforms because they aren't necessary for the rescue of the Captain.
And it is part of my plan that 'Tigger77' is killed in the enemy's first turn so that I get control of a worm which is in a better position than him.

Level 14:
Nothing special again, but still a nice level.

Level 15:
That was an easy one. I like the fact 'Tigger77' kills himself so that one worm who is nearby the enemies can take all the work.
I also like the fact they don't attack me because I stand directly in front of them.

Level 16:
No idea how to comment on this. Solid level with a nice suicide.

Level 17:
Absolutely nice level with that double-kill as the highlight. The last grenade thrown under Gaffer's chair is a nice finish, too.
It's really ridiculous to see this run when I'm thinking back how hard it was at the beginning of my Worms-time.

Level 18:
Easier than I thought. But it was really fun to perform and I'm absolutely happy with the result.

Level 19:
One of the hardest levels of this run. The grenade at the beginning is hard as hell, but the highlight is definitely the dynamite-rifle-combo to kill the 'Gang Leader'.
The rest of this level is just standard.

Level 20:
Nice one-turn-level. Unfortunately there are two smaller mistakes, but the fact that I have wind10 blowing me in the right direction saves a lot of time.

Level 21:
Another boring (and long) level with another suicide to be faster, again.

Level 22:
I hate this. This video is from one of my tests to try out some positions and strategies. So I had no plan that time and I had to improvise my actions.
And it wasn't played fast, as everyone can see. But then there was this case similar to level one because the enemy kills one of his mates which allows me to finish it one turn faster than normal. So this fucked up try is ? because of extreme luck ? faster than all other tries which were played without mistakes.
I'm really not happy about submitting this.

Level 24:
Another nice level, but I don't really know what to say about it. It's part of the plan that the enemy is killing one of my worms in his first turn and the kill with the monkey is harder than it looks. That's all.

Level 25:
Nice level which isn't really difficult at all. I like the end with that earthquake.

Level 26:
I like this level. It's a lot of fun to shoot with the bazooka and there is that nice skip of the exploding isle with the house because I'm collecting the bazooka-box in my second turn. It's sad that the enemies waste a lot of time, but they always act like this.

Level 27:
This level is really awesome. The plan was hard to perform but it's so nice that no one attacks me because I stand nearby their houses.
The way I go on the rollercoaster is nice, too.

Level 28:
This is an ugly level. I know that I'm not as fast as possible, but the enemies' turns are shorter than they are normally.

Level 30:
Nice level. My aiming is very good this time and it's so nice to get this double-kill in my second turn which is followed by a suicide to trigger another suicide by the stupid enemy.

Level 31:
The plan of this level is just awesome. I was a bit surprised about this getting a gold ranking, because I'm using more turns than necessary and I even lose my first worm because of suicide, but ok. The minor mistakes I make are more than equalized by that strong wind in my last turn so I'm happy with this.

Level 32:
This level absolutely sucks. I see no way to finish it before the water kills them, so I just had to play until the timer shows zero. (but there still is a suicide)

Level 33:
Another awesome level because of these baseball-actions to blow up two mines at once. It's a bit sad that there was only the possibility for two of these actions, but that's ok because they were really hard. The finish with that backflip to the balcony is nice, too.

Level 34:
It's so nice that only one enemy attacks me. My second shot with the rifle looks crappy but that's just because I can't shoot before the first worm is dead.
The way I get onto the boat with the parachute after throwing dynamite with the y-button is a nice 'trick', too.

Level 35:
This level is way harder to run than all other levels of Worms3D (except of Level 4, maybe) but that's allright because it's the last one.
Every single shot of this level is really difficult, but the hardest one is the one with the rocket (yes, I'm serious).
It's just ridiculous how perfect you have to hit him that he falls into the water. Another point is that the enemies are moving randomly.
I know that I played not really fast because of this level's difficulty, but I'm still absolutely happy that I got this one with this plan.

And that's it!
It took me about one year to finish this run because I wasn't able to work on my run on workdays. Now I hope that you enjoyed the results.