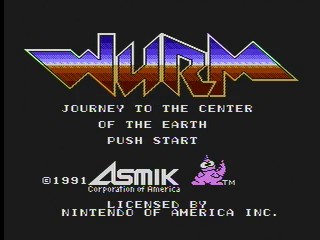 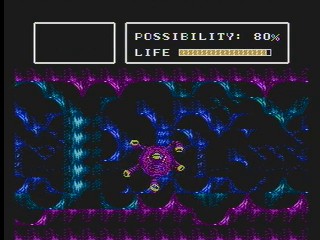 This is quite possibly the most anime game on the NES.

Wurm attempts to be 4 games in one, and falls flat on its face in all 4 game types. In lieu of breaking down everything in order, I'll just summarize how each game type goes:

Horizontal Shmup: Technically you can drive on the ground as the drill car, but you can also start flying, and later transform into a jet. While these sections are not autoscrollers, there is basically nothing that can slow you down since flying to terrain does next to no damage (compared to getting hit by most enemies doing half your health bar), combined with the continuous health regen when you aren't taking damage.

FPS: Basically the boss battles of the game, enemies are killed by getting their possibility to 100%, then shooting them a single time. Talking to crew members can have various effects, including either adding or reducing possibility and adding or removing life. Learning which menu options were worth the time was a big part of routing. It should also be noted that most of these sections have really, REALLY bad hitbox issues, the dinosaur in particular you almost always have to shoot to the side of instead of shooting at his actual sprite.

Platforming: These sections mostly are just running past everything since there is no hitstun. Routing these was most of the planning phase, since many of the maps are setup in ways that make no sense whatsoever. Interestingly, fighting the bosses has no effect at all, they just leave after a set amount of time.

Verticle Shmup: True autoscrollers, the only real risk here is not getting fuel drops most of the time, otherwise just dodge enemies. Like the horizontal shump sections, flying into walls does minimal damage.

Text: I'm listing this as a game mode because text mashing in this game is a significant thing. Both A and B advance the text, so it isn't too bad to mash.

So, in the end, I'm not really completely sure why I did this, but here it is.