This May 1993 Genesis release permitted intrepid players to choose between Nightcrawler, Wolverine, Gambit and Cyclops before taking their selected mutant heroically forth into a confusing environment crawling with unremarkable foes. 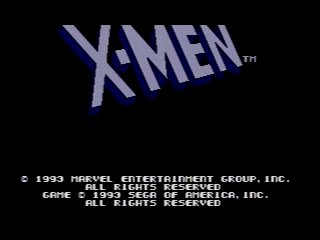 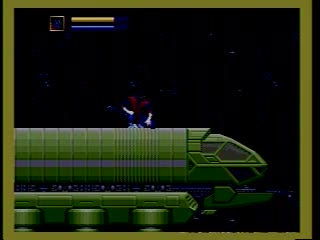 Ah, X-Men on Genesis, this brings back memories. Being one of the first games I received for the lovely system, it got the most playtime (next to maybe Sonic 1). This run came about shortly after seeing the X-Men run for SNES. It saddened me to see the SNES version get so much attention with no love for the Sega version.

The game itself isn't too bad, but it's not the greatest game in the world either. You get to choose between Nightcrawler, Wolverine, Gambit, and Cyclops and take them out into a pretty standard platform world that's populated with faceless bad guys and levels that make little to no sense at all. Looking back, the lack of sense in the levels and bad programming were tolerable, but the mutant energy meter always struck a bad chord. I mean, what's the point in playing as your favorite mutant (so long as he's on the list) if you do nothing but punch all day?

Anyway, back on topic. I used Nightcrawler for the majority of the run simply because he was made for speedrunning. His air attack is a kick dive that can be extended until you hit the ground (which moves about 2x faster than walking, possibly more), you can use his teleport ability to bypass level triggers and mandatory obstacles, going into a tele state will insta-kill all normal enemies no matter how strong they are (minus bosses unfortunately), and..................he's blue. Who wants to do a speedrun with a guy wearing yellow spandex??

A few problems with the game to note:

The mutant energy meter really put a damper on what I could and could not do throughout the entire run. The fastest method to move around any level would be to teleport up to the ceiling, then kick dive. Wash, rinse, repeat. BUT on a full charge the most you can do is 3 short teleports before the meter runs dry, or 2 medium teleports. The difference between a short teleport and a medium teleport is about 3-6 frames (no joke) so timing is crucial when executing. To make it even harder, the blue X to recharge the mutant meter can rarely be found where I need it, and one of them that I actually do get gives me nothing at all (found in Ahab's Future). So a lot of time went into planning out what teleports I could do, which ones I couldn't, and how much time would I waste between levels recharging.

The hitbox detection is also really off in a lot of sections, especially when it comes to landing on platforms. There were many times when I'd go right through a platform even though my feet were clearly on it (and not just on the edge, more like at the middle) which would cause me to restart the run. The flying purple jerks on Mojo's Crunch also have horrible hitbox detection for their punch attacks. Even if I'm right on top of the guy, above his arm, and clearly kicking his head in, if he punches I'll take the shot and he'll be fine. Also, if he's flying above me and punches, if any part of his body is overlapping with me (even the bottom of his legs) I'll get hit. At least 40 runs were killed because of them.

The controls also tend to be a pain. When testing on an emulator, I found out that the game displays at 60fps. However, controller input is only accepted at 30hz, so what the game does is renders a frame, waits for input, renders, waits, renders, etc etc etc thus giving the impression of only 30fps display. There are plenty of times though that the game can and will update the screen on any of the frames, which will pause the controller input being accepted for a few frames. Usually this will happen when you land on a platform on the wrong frame or come out of a tele state and try to kick dive on the first possible frame. When this happens, anything you just pressed will be completely ignored and can continue to do so for almost a quarter second. There were times I'd be in a rhythm with my jumps/attacks and if I hit one of those input delay spots, my rhythm would get thrown off since I'd be hitting the buttons on the frame the game doesn't accept input (which doesn't rollover to the next frame).

And that's the game. Heck I run the game so fast I even skipped the ending dialogue. The most time that can be shaved off from the game is about 4-7 seconds tops, and that's only from cleaning up the small mistakes I had. If someone wanted to save more time, more sections to tele-boost would have to be found or a major glitch would need to be discovered.

I'd like to thank Spider-Waffle first and foremost. If he didn't keep pushing me and pointing out possible time-savers and route changes this run never would've gotten as optimized as it is now. When I first started my unofficial time was 10:25. That means I've shaved almost 2 minutes off of my original time, which is no easy feat for a game this short.

I also want to thank Sticykman for allowing me to steal his TAS ideas and (ab)use them in my run (and for being a nice cheerleader). Hopefully this run getting put up will solve his blue balls issue.

My best friend Ken also deserves a lot of thanks for helping to get me started on this and for letting me borrow his spare Genesis (the one I got off of eBay didn't work) and also for being a good cheerleader.

My girlfriend Mary deserves some thanks for putting up with my crap and supporting me while I cursed and screamed my head off at the tv like a maniac.

I'd like to say a big thanks to the guys at SDA for all their hard work in keeping the site going and getting the runs ripped/uploaded.

The final thanks go to you, the viewer, for watching and (hopefully) enjoying seeing a 6-month chunk of my life.