Released in 1990, everyone's favorite pizza-eating Domino's mascot (pretty easy to be a favorite when there's only one) was granted his own video game. The Noid traverses through various stages on foot, with a skateboard, and with a gyrocopter contraption. Along the way, the Noid encounters a colorful variety of people including, but not limited to, a hockey goalie, a punk, and his most devious opponent, himself! 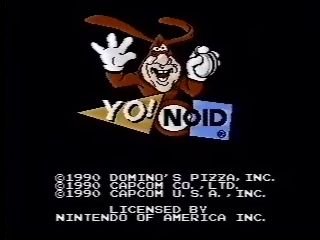 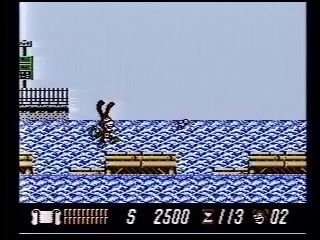 This speedrun completes Yo! Noid in 22:40. I'd like to see myself get around 21 minutes by getting luckier sometime.

I've really always loved this game since I was a kid. One reason I chose to speedrun this is that it's a platformer(and I'm really good at platformers), but beside that, this game just rocks.

I think as a kid I loved it because he used a Yo-Yo to kill enemies, he had a pogostick, a skateboard, and a helicopter thing. And I forgot to mention PIZZA, which is one of the most amazing foods out there! I also really enjoy how the pizza actually looks like hamburgers. So this game is just awesome.

On to the speedrun...

In level:
Overall my "in level" speedrunning was awesome. I didn't really make too many mistakes at all. Although in the second to last level I kept missing this one jump by accident, the stairs were making it difficult to get the right spot to jump at. Other than a few other minor mistakes, I played very well. I'd say I probably made about 20 or so seconds of in-level errors.

Whac-A-Mole games:
Every mole fight went perfectly, I have no complaints here. I hit the moles because doing so lowers the amount of time you have to hit the enemies, which is good for a speedrun. ;)

Overall I'd say I did very well and just got pretty unlucky with all the pizza battles. I'm thinking that over a minute could be made up from just the pizza battles. About 21:30 seems like a reasonable time if the in-level play was similar to mine, but you were just a bit luckier. This is kind of a bad game to speedrun because of the luck, just like Super Mario Bros. 3. It seems like I've been pretty lucky in all my speedruns except for this one, but I certainly haven't played this one as much as most of my other runs. ;) It seems like I'm bound to have a very lucky experience with Yo! Noid in the future though.

I bet with perfect pizza battles, the time would have been under 21 minutes, so yeah, luck is important.

One important thing to note is that as I'm writing these comments, I'm actually eating pizza hut pizza. Sorry Dominos! Maybe if you still had The Noid I'd have chosen you. ;)