The true sequel to Yoshi's Island was released in March 1998: Yoshi is finally allowed to stand on his own legs. Mario is not around at all this time, and the stages are quite a bit different. They aren't completed by finding a goal, but rather eating the correct amount of fruit to proceed through the storybook. 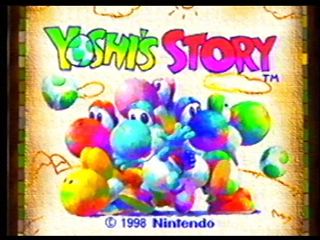 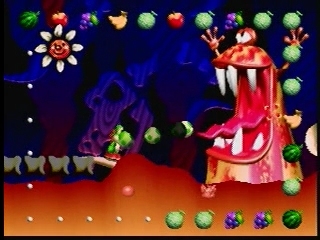 While this originally started this up, it was just a break from marathon practice and killing myself over Tony Hawk, but it turned into something I'm rather pleased with. I was originally looking to do an IL table for this game (btw if anyone wants to collaborate on one, PM me) and started with what I could already find any% routes for, but as I got better and the levels in the route I thought I'd give an SS a try and it turned into this. Is it beatable? Yes, but is it good? Yes, yes it is.

There's not really anything to say here, I didn't make any mistakes here. Changes to the old route are hitting the fourth caterpillar instead of the first one.

Only mistake I made on this level is the ground pound on the melon near the end, so I had to pound again. Changes here are getting less eggs and jumping over the Blarggs instead of shooting them, and skipping the bubble in the second room.

The page turned, and the Yoshis grew happier.
(Yes, this follows every level, in-game and in-comments.)

The snake climbing looks a little off here. Sometimes little hops don't seem to make the direction change. As a result, the green snake was a little higher than normal and got me hit by the flying Shy Guy. Changes in this level involve getting a few more fruits in the room so I don't have to turn around to get the extra reward melons. Cloud 'N' Candy is ridiculously easy.

The first room looked pretty gross, missing grabs on the first three fruits. I can never get all of the fruits to stay in place in the second room. One of them always seems to disappear before I can get to it, so I get the apple at the bottom of the main room instead. I also had a little blip in the giant egg, as after getting the heart I seemed to be stuck for a moment. This was probably the weakest level.

The page turned, and the Yoshis grew happier, though not as happy as they would've if this level went better.

I took a hit near the beginning and fill into the little pit. And apparently I forgot what the hell I was supposed to do and egged the bubble instead of pounding, killing a Shy Guy and losing a fruit, but fortunately this level has an easy extra one at the end.

The pendelums take an obnoxiously long time to open the doors... I take a hit instead of waiting for the blade to go down and back up. I don't think there's much a time difference. And good god I think I almost died five times in the gears. That was so close. It took me a little bit to cross the barrel so I played it safe and waited to not get crushed.
Baby Bowser was alright, though I really would've like to have gotten him on the first egg before he had the chance to get on the ghost.

And that's it! The Yoshis have their tree of useless rotten fruit and sing and dance about it. By the way, this game has the greatest credits music ever. Stick around and listen!