Released in April 1992, A Link to the Past was the third game in the Zelda series and the only one to be made for Super Nintendo. Link goes on a quest that spans two worlds in an effort to restore the seal of the 7 wise men, recently broken by the mysterious wizard Agahnim. The game was re-released for GBA in December 2002, featuring faster text scrolling, Link screaming, a redone Ice Palace puzzle, and a link with the included game, "The Four Swords". 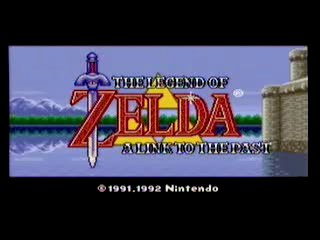 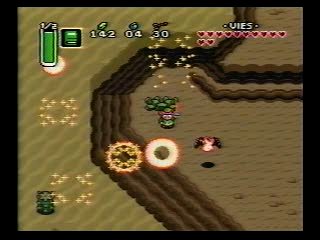 100% is based on getting all items on the subscreen, all heart pieces, and max level of equipment except the bomb and arrow upgrades. The level 2 shield and blue mail can be skipped since they are replaced by the mirror shield & red mail.

Runs on the Japanese SNES version:

Hi. Here are some comments:

Light World is 28:27.8 with 0bb at warp to Dark World after Agahnim. It's 16.4 seconds slower than my best ever at that point, which is 28:11 with 0bb. The first third of the game is not too exciting for the viewer because it's all about simple movement technique and overall it's slower-paced than Dark World. This run has an awful Light World but 0bb saved it.

bb = Blue Ball = An attack Agahnim does that you can't deflect back at him = wastes time. Each Blue Ball wastes ~ 6 seconds, and at 3bb-7bb-11bb-15bb it wastes 6+6 seconds due to Agahnim's lightning attack. His first attack of each cycle is always an energy ball but the rest is pure luck. Everybody hates this boss because there is no execution whatsoever and he just flat out wastes time (very often).

The next segment, Palace of Darkness was kind of bad for my standards. Really, the only reason it's bad is because of RNG (Random Number Generation, luck) in the turtle room and for Helmasaur. Even got a bufferless hammerjump.

The next splits, from Thieves' Town to Ganon's Tower, were all really strong, or at least, better than average. Ganon's Tower, Skull Woods and Ice Palace are the highlights of the run if you ask me.

Got the 0 cycle on Arrghus which saves 6 seconds, but failed the one on Vitreous. That one wastes 3 seconds.

Turtle Rock and Misery Mire are known for having very trolly overworlds before the dungeons. No real troll here, no squirrel block. Both dungeons went great aside from bonking on one of the key doors and getting bunnied right after in Turtle Rock.

Then, after that awesome Ganon's Tower, Ganon was like... nope. He warped 8 times, each warp wasting 2 seconds. On top of that, I menu'd 2 extra times because I thought I still had the Hookshot equipped. Nothing better than completing a great run with the worst final fight of all time. I literally lost 18+ seconds over a good Ganon fight. It didn't matter anyways because I was so far ahead after Ganon's Tower. It only shows how strong the rest of Dark World was.

Kryssstal - For being a god and inspiring me to speedrun this game.

Jadin - For being the Escape & pumping god. Also learned a bunch of strats by watching his streams and TASes. Very nice guy, very helpful.

The rollin' deep crew - You know who you are. Keep on rollin' deep and stay fly. You kept me motivated to run & race this game.

Acmlm, Andy, SeanCass & Xreleased - For answering my thousands of noob questions a day back when I was learning the game.

#alttp - For being an amazingly helpful and welcoming community. I had fun hanging out with you and I still do.

Shoutouts to you if you read through this semi-essay.
Now excuse me while you hopefully enjoy this run. Brb, going to eat blue bacon for breakfast.

When I first thought about writing run comments, I wanted to really spell things out and give as many details in text as I could, but the truth of the matter is, I really wouldn't like to do that after all. That being said, I'll spout some mumbo jumbo instead.

As I was doing this run, some things seemed too good to be true. In the beginning, there were rupees everywhere that cost me basically no time to grab. By the time I was done with the light world, I had about 80 more than I usually do, and that number generally doesn't vary much. The digging game went great and I wasn't too surprised about it, but the fact that the chest game also went well for me kind of blew my mind. I have had good games before, but this was the first time they ever decided to both be good in the same run.

As far as mistakes go, I might be capable of shaving off as much as 30 seconds to one minute from this run, but the with the amount of luck this run required, that isn't likely to happen for me in a long, long time. There are others out there who, I am sure, could beat my time handily. I like to think of this run as a place-holder, or a challenge to those incredibly skilled players. Come knock my run off the page. Please.

After thoughts:
I might as well answer some questions that are likely to arise.

Q: If you aren't Japanese, then why would you play the Japanese version over the English version?
A: I'm not Japanese in any way shape or form, but there are a few reasons. Firstly, there is less text in the JP version so some time is saved by that alone. Secondly, there are many tricks/glitches that help save time which can only be done in the Japanese 1.0 version of the cartridge, which is what this run was done on. Thirdly... um, Japanese is cool I guess?

Q: Tricks and glitches?!?!?!
A: Most of the tricks involve doing two actions at once, such as the hammer dash and the super run. In the JP 1.0 version of the game, you can do many things simultaneously, though most don't benefit the run. Hammer dash = dash + hammer on Y button at the same time. The super speed is done by, dashing and using the hookshot at the same time while on stairs. I don't really understand how it works, but it's fairly easy to pull off and it makes you go so wonderfully fast. It's my favorite trick in the game. There is also a trick that lets you completely delete pushable blocks by using the mirror while mid-push. I would use it on every pushable block in the game that gets in my way, but there are some limitations that REALLY limit this trick's usefulness.

Q: Digging and chest game. Spill the beans.
A: Well, the digging game has a really convoluted way of determining what you get when you dig. The long and short of it is that it is almost completely random, though there are some things you can count on, such as that you can't get the heart very early in the digging game. It will only happen after 20 or so digs. On the other hand, the digging method and route I used in this run has been serving me VERY well. Of my last 6 attempts (this one included) I was able to get the heart on the first round of digging in 5 of those. Conversely, the chest game is much simpler in that you can get the heart piece every time you play if you open the second chest while on the right frame of animation, just to the right of the center of the chest.

Q: Why didn't you get the blue boomerang, the blue armor, the red shield, or the bomb and arrow upgrades? I thought this was 100%.
A: Why would you ask such a question? Truthfully though, 100% for this game has been defined as a completed inventory and all hearts/heart pieces. What that means is that for items with multiple upgrades, you can skip to the final version of that item and it still counts because you have the final version of what the inventory screen should show.

Q: But seriously, bomb and arrow upgrades should count.
A: No they shouldn't.

Well, so much for having brief comments. Anyway, I hope you enjoy watching the run!

So the RNG (luck) in this run was:

Tower of Hera was really bad. I forgot to hit the Switch in the Beetle room and had to come back to do it. Overall, the Light World was pretty sloppy.

Dark World, on the other hand, was amazing if you exclude Ganon's Tower, because that one was horrible. I lost 25 seconds on that segment alone. I fell on the canonball bridge and everything was kind of bad.

If you only have 30-35 minutes to spend, then watch:
Palace of Darkness, Ice Palace, Misery Mire, Turtle Rock & the Armos refight in Ganon's Tower.

Q: Is there a way to manipulate the outcome of the Chest and Digging Game?
A: Not really. On the Japanese 1.0 version, the Chest Game HP may only be found in the 2nd chest you open. And for the Digging Game, digs number 1 through 24 will never reveal the HP. Starting from the 25th dig, you have 1 in 32 chance of getting the HP. If you don't get it, rince and repeat. Though for a speedrun, it really sucks.

Q: Why did you skip the 70 Arrows & 50 Bombs capacity upgrade?
A: Because you don't want to watch 10 minutes of throwing rupees in a pond.

Q: How many times did you finish this game?
A: You don't want to know. I don't either.