Released in March 1993, Zen: Intergalactic Ninja is one of those quality NES games loosely based on an obscure comic book. Apparently in the comic Zen spends all of his time whacking things to death with his stick, slowly jumping onto small moving platforms, and falling through collapsing caverns for no good reason; all while doing nothing of actual value to the world. This action is faithfully reproduced in the game, making the name a bit of a misnomer, since the numerous one-hit kills and unresponsive controls can easily lead a reasonable adult into a blinding rage within seconds. 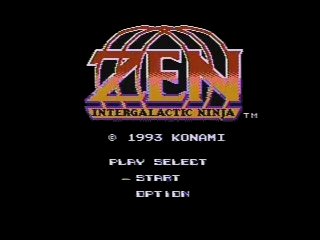 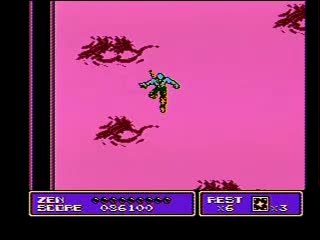 Zen is a great game and a fun speedrun.

You start off with a choice of 4 levels. I do the hardest ones first.

Toxic Factory - Not much to say here. Attacking in the air gives you more airtime to avoid extra jumps. Fastest way to kill the boss is to grab him, make him dizzy, and give him the wiggle.

After the first and third stage there's a bonus game. The items appear in the same order but random locations every time. Most important here are the shields and max health.

Oil Rig - This is the tough one. Immediately starts with a tricky wall jump over a pit. The fireballs that rain from the sky are on a global timer, so its important to keep pace. The shields allow me to walk through the fire, taking one shield damage instead of 4 health damage. Every 8th enemy drops a fire extinguisher, which I use on the boss to save a cycle. Little mad I missed a jump near the end, but it's the only major mistake.

Saving Jeremy - This ones also tough, but with some precise jumps I can get him to hang out above the rope, and save time not letting him fly to the top.

Forest - Best chance to attack is when she's throwing the acid

Swamp - This boss pops up in a set pattern, but doesn't appear if you stand too close, so you have to play this back and forth game with him.

Robot - Comes apart after set damages, so the order of attacks I do is important.

Clone - Wastes a bunch of time when you touch him, but its pretty much unavoidable without taking too much time. The neutral slash does more damage than other attacks, so it helps to get close too. At three health he tries to escape into one of the tubes and heal, and I just catch him in time.

Lord Contaminous - First phases is simple. The second phase is also simple, exept that he heals once he reaches the middle and is under 4.5 health, so the timing of attacks is critical here.