Zillion, based on the anime show of the same name, was released on the Sega Master System in 1987. It is a free-scrolling platformer with emphasis on inspecting elements in the environment for codes to progress. The game and anime were named after the laser gun employed by the main characters, and this gun was used as a design model for the Sega Master System Light Phaser. Zillion follows the story of JJ, who, along with any other members of the White Knights he can rescue, is trying to destroy the evil Norsa empire's space base. 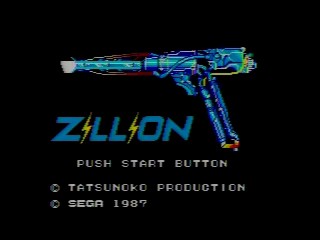 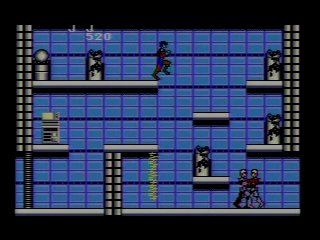 Here is my Zillion bad ending speed run for the good old Sega Master System. J.J., the main character, has to infiltrate the enemy base, retrieve five floppy disks, enter a self-destruct code into the main computer, and get out before the enemy base explodes. There are soldiers who will try to prevent you from doing this, as well as mines, barriers, and alarm-triggering sensors. Two of your allies, Apple and Champ, have been captured by the enemy and may be rescued (this determines whether you get the good or bad ending, but is not required to complete the game).

Most rooms have generic computer terminals that can be accessed with any one of many cards scattered throughout the maze. Each computer has ten symbols that can be entered (indicated below as numbers 1 through 10). Some rooms require you blast open canisters that provide level ups, gun improvements, or codes that must be entered into that room's computer to open doors and advance. If a code to open the doors is entered, the card is returned. Other codes may be entered as well. The codes that I use are as follows:

For those rooms where codes need to be entered to advance, the codes change every time the game is played, so I can't simply memorize every room's code and not break open any canisters. To complete the game quickly by himself, J.J. needs to acquire at an absolute minimum:

All five floppy disks
Two gun power ups
Four regular cards
The red card
Level ups to get JJ to level 8 as fast as possible, other level ups as necessary to keep his hit points up.

The base explosion code cannot be entered unless you have all five floppy disks in your possession. A level three gun is required to break open critical canisters (including three of the floppy disks and the red card). The level ups fill my hit points up to the maximum, gradually increase my maximum hit points, reduce the damage taken from barriers and gunshots, and gradually increase running speed and jumping height.

In this section, the name of the game is to increase J.J.'s level as high as possible in preparation for the rest of the game. Once he hits level 5, he starts to run noticeably faster and can jump higher. By the end of this section, he is level 6. Also, knowing that I only need four blue cards for the entire run, I collect the first four that I pass and don't collect any more for the rest of the run.

This is the shortest section of the game, mainly because most of it can be skipped. I have to go a total of two rooms out of the way to get the final two level ups for J.J., but they are necessary, as demonstrated later. When the pursuit of the second floppy is over (ending with the Warp B so I can get the third floppy that I passed since I didn't have enough gun power to break the canister) you can see that I simply run through all the barriers, approximately 12 of them in just three or four rooms. At level 7, these barriers cause 80 damage to J.J. At level 8, they only cause 40 damage. Therefore, the slight detours to get the last two level ups actually save quite a bit of time at the end by allowing me to collect fewer cards and not stop the barriers to avoid dying.

This is the longest and most complex section, due to the sheer size of the section as a whole, the non-linear path that must be taken to open up everything, and the backtracking needed to get both floppies and get to the final computer quickly. Once both floppies are acquired, another Warp B is used, since the entrance to the path to the final computer is actually near the beginning of the section.

Once the base explosion code is entered, the final boss shows up. As demonstrated, he is laughably easy to kill. I must thank "Mattel" (the runner who did the previous version of this run) for showing me that I can shoot the boss multiple times every time he opens his mouth. At best, I can shoot him three times every time he opens up, usually I can get him twice. The number of hits he takes seems to vary, but usually 20 to 25 will do it. Then I run like hell to get out of there before the base explodes.

My play for the entire run is not flawless, but this was by far my best run as far as jumping over mines goes (which is very difficult to consistently accomplish). There were no major computer slipups and maybe a half dozen or so jumping errors, but besides that, I am happy with the result.

As always, thanks for watching.