A 2007 Sigma Team release for Windows, Zombie Shooter makes damned sure never to misrepresent itself as a game that's not about shooting zombies. It's viewed from a 3/4 isometric angle and you control your movement and aim separately with keyboard and mouse respectively. The goal in each mission tends to be activating a couple of power generators and then dashing for the exit, wading through the hordes in time for shopping for the next mission on the bank roll you've accumulated by finding hidden stashes throughout the area. Hint: get the flamethrower. 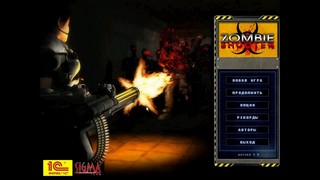 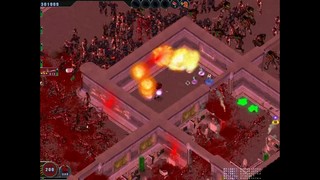 This game is easy to go, but difficult to run. There are no quicksaves/loads, no ability to rerun previous level.
In beginning of game I chose a female character because it has higher speed and accuracy (but lower health and strength).
First 3 levels I had to economize money and open only one richest cache (mission 2 - 400 money) order to purchasing rocket launcher in fourth level.
Also money from 5,6,7 and 8 levels used to purchase all upgrades for flame thrower which make it more powerful then magma gun in level nine,
so I made a accurate calculation and not used superfluous cashes at all time. There are a big amount of variants of gun choice,
but fastest was only one - is grenadegun (+2 upgrades) -> rocket (+ upgrade) -> flame thrower (+3 upgrades).
Last upgrade for grenadegun was picked up in third mission.