In 1992 was that time Gremlin Graphics took the phat Chupa Chups dough (didn't that basically make them their sugar daddy?), and splurged their unholy platformer confections onto nine different platforms like the Nine Rings of Power. It wasn't not just tongue candy but eye candy and ear candy as well to varying degrees between the lot of them. On boot-up, you're almost immediately greeted by some of the most egregious product placement in gaming history. The game proper takes typical turns, with two-three thematic levels, end boss and bonus minigame on rinse and repeat, though its exact configuration pivots on which Ring it is you've succumbed to. 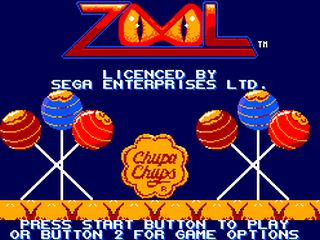 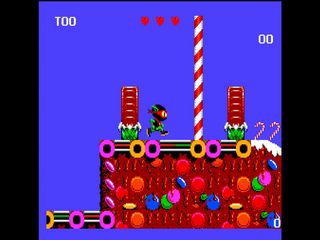 
Why 50hz, there are a couple of PAL only Master System games that had runs done in 60hz, so why not this one?


Gremlin Interactive (aka Infogrames Studios) were based in the UK where the default hz setting before the Dreamcast was 50, not 60.

How does this glitch work?
At the moment I do not know the exact reason why it works but if the ninja is on a certain spot of the edge and press UP, the game simply freaks out and activates the Nth Dimension warp to the credits.

How easy is this glitch?
The turnaround method 1st try is the hardest but if you want to at least beat the game fast, you can try jumping from the lower left yellow donut to the glitchy edge, push UP and hope for the best.

The website is timing this under 1 second and Speedrun.com is timing it over 8 seconds how come?
Speed Demos Archive (this website) start and end the timer differently to popular community timing.
Speed Demos Archive starts the timer on first frame of control and ends on the first frame of losing control.
In this case it starts when I move left and ends on the first glitched frame.

Speedrun.com's timing starts when you press 2 on the menu "Gremlin Graphics" and ends when the screen fully fades to black after executing the glitch.
You could think of this like how people may prefer measuring stuff in Metric over Imperial but the timing conversion is different in every game.

Is this the fastest time for Speedrun.com (https://www.speedrun.com/zool_sega_master_system/full_game)?
No, this run doesn't do the 2 frame perfect pauses right after pressing UP to save 0.04 seconds.
Doing these extra 2 pauses to fade to black sooner would make ZERO difference for Speed Demos Archive's timing because it ends the moment the glitched frame appears.
TASVideos timing would end right after pressing UP because TAS runs are timed with the shortest possible input sequence, pressing the extra 2 pauses would waste 3-4 frames.
Ah the joys of different timing methods.


Shoutouts to  Revenged2, The8bitbeast, EZScape and many other players who took part in this phenomenon from December 2019 to Early January 2020