Created in a very retro-esque early 80's style, 2010 l'Abbaye Des Morts tells the story of a monk of the Catharic order during the so-called Albigensian crusade, a religious purge initiated by the Pope in 13th century France. He (the monk not the Pope) gets chased by bloodthirsty zealots into an abandoned old abbey where his sojourn will be dotted with terrible discoveries of its past. 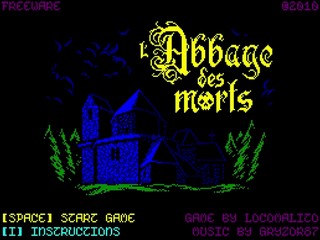 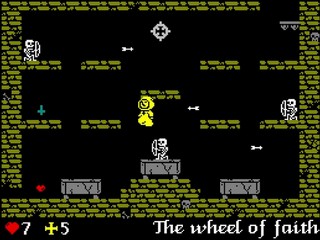 This is a single segment run of the 1.2 PC version released in 2014. Original 1.1 version from 2010 has different controls, level design and in general plays rougher and slower.

The objective of l'Abbaye des Morts is to find and collect twelve hidden crosses. Areas in the game can be explored freely with few being behind locked doors. Additionally four of the crosses are upside down by default: they require a switch that turns them collectable. These two circumstances make routing a good puzzle, but luckily the health and checkpoint system allow you to cut tedious backtracking with death abuse.

Jean's hitbox doesn't exactly match the character sprite as enemies and their projectiles can partially clip through you.

Speaking of jumping, there's plenty of it since none of the normal enemies can be killed.
One interesting factor however is that when jumping, Jean always tries to go upwards a certain amount regardless if he hits anything above him. This results in Jean staying up in the air, sort of floating or gliding when hitting his head to the ceiling. Properly used this shortens Jean's descending from a jump.

Timing starts on the first frame of gaining control, meaning when the intro text screen is skipped by pressing space.
In the order of progress, here's some notes explaining what's happening in certain rooms.

The Altar - The first stone pillar checkpoint. Dying resets you back to the pillar you've activated last, so the checkpoint system let's you conveniently teleport for the cost of one life. And there's plenty of hearts from the get-go.
The way forward appears to be a dead end so up we climb...

Tower of the Bell - Ring the bell and a secret hatch in The Altar opens!

The Altar - ...I spawn back here! Now above the unlocked gap there's the only collectable scroll, that cannot be avoided. Jumping for it assures I can tap space (=jump key) to skip its message as fast as possible without worrying I accidentally jump after it's gone.
The yellow scrolls only tell backstory and hints for the game, so they can be ignored in this run.

Hidden Garden - The checkpoint has to avoided with a very quick jump to keep the pillar in The Altar active. Here's also the first showcase of the forgiving hitboxes. Still, timing can't be off much on this series of jumps, because going too fast will get you killed by either of the last two projectiles.

Underground River - The water drop can be sketchy, it might not kill you if go for it a bit early or position yourself wrong.

The Wheel of Faith - Most difficult set of jumps. First one has to be timed perfectly with the arrow passing through your head. For the second jump I use the cracks on the tomb as a reference so that Jean's sprite ends on top of them. Third jump over the skelly man has to be pretty much frame perfect or the arrow hits you.

Cave of Illusions - After entering this screen, hitting the small floating platform above shortens Jean's fall to the platform with grass on the left.
Crawling through the super secret wall, and Jean grabs cross number six...with his face. It's important to keep holding down here: otherwise you will stand up automatically since the cross is just far enough from the wall to make the game think Jean isn't between the floor and ceiling anymore.
Illusions continue when the corner spikes prove to be fake.

Pestilent Beast - Landing on the small platform across the lever can sometimes get you stuck crouched. You can jump out of this state, but it is distracting.
Pulling the lever here unlocks an upcoming door. Finally a jump, or a calm walk, to the flames and I'm all the way back to...

The Altar - The door opens, but it has to wait - rest of the crosses are upside down and cannot be collected. Solution to this is found in The Wheel of Faith.

Catacombs - This jump goes smoothly, but it is pretty accurate. Mistiming results in either landing completely on the grey platform, forcing you to hit the wall when walking off, or barely clipping the edge, awkwardly pushing you back up for a split second.

The Wheel of Faith - The symbol up in the middle does its job, as the cross straight ahead demonstrates. Exploring the church further can now continue!

The Altar - Small head bump to the entrance, tends to happen here.

Hangman Tree - You can't crawl past or jump over the last guy - waiting for him to rise up and running below is the only option. The lever unlocks another locked door coming up.
The hitbox/detection thing can mess up the landing on the grey platforms by making Jean clip through the edges and fall back down.

Hidden Garden - No need to worry about the checkpoint this time. Thanks to Jean's jump mechanic you can hover over the funky worm. It is possible to get killed during this jump, for whatever reason.

Underground River - Door unlocked! The jump is kinda specific, but you can do it without letting go of the left arrow key.

Unexpected Gate - Stepped in to a portal, fell down and here we are. Using the black line in the platform sprite as reference, I land on an secret invisible platform. Another fast jump is needed to avoid the projectile and reach the lever, unlocking one last door.

Evil Church - During routing, I tried to make the movement as ongoing as possible, without pauses. Still, on this screen the combination of the two devils and an arrow shooting skeleton really forces you to wait a moment between jumps.
The final checkpoint here is useful because the projectiles in the next screen, Tortured Souls, don't let you jump back as easily as they let you reach the twelth cross.

Ashes to Ashes - Notice the early jump just before entering the screen.
Another pause because of the skull bat. I'm using the moment the fire ball in front of me bounces back up as a reference when to continue forward.

SATAN !!! - Time to play all your favorite rock tunes spɹɐʍʞɔɐq! Now that all of the crosses have been acquired, they start to form handy platforms to jump on. Knowing the position of the lowest cross, it's possible to hop on its place early.
Dodging the projectiles with the leap to the left was a neat discovery for this room. After practise it's pretty great and satisfying finish for the run.

Lastly Satan leaves behind a red scroll that activates the ending, so I run to the scrolls eventual position right away. Timing stops when the message appears on screen, completing this run in 3 minutes and 30 seconds.

Shout-outs to Pb3O4 for getting me to run this fun little game by simply creating a thread about it at SDA forums. He helped a lot with the routing and finding alternative strats.