Sequel to Heroes of the Lance, 1989's Dragons of Flame is an NES rendering of the genre grande masters', Weis' and Hickman's, AD&D module of the same name. It's kind of basic, with an eight-man band of seasoned spellcasters and well-built warriors beridding the regions of Qualinost and Sla-Mori of a menacing Draconian army. New to it was overworld sections with annoying randomly spawning mobs. 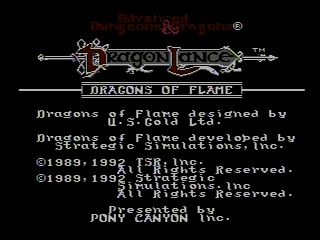 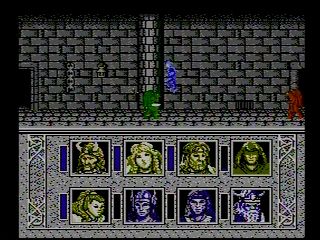 Disclaimer
I did this run on a Powerpak. In case it matters for future reference, I used a ROM with checksum ac7fa71cfbbe4ce59897e2818f5a3651.

Speedrun information
For information about speedrunning Dragons of Flame, go to the SDA knowledge base (referred to as sdakb in my comments below):
https://kb.speeddemosarchive.com/ADnD:_Dragons_of_Flame

Overall, this was a good attempt, well above average. I've had a few attempts a few seconds faster, but those are really outliers. It's also possible to reduce the number of enemy manipulations in the forest to save additional time. However, the success rate would quickly diminish by skipping some of them.
This level is extremly random and frustrating. Most attempts die within a few seconds because of RNG. With every reset costing almost a minute due to the unavoidable text boxes at the start, this level (game) quickly became frustrating. Any potential speedrunner of this game needs to be equipped with a big portion of patience.

The time for this level was about what I was hoping for. While this level is far easier to get through than the first overworld, it still requires quite a bit of luck to get a faster time. With the two overworlds depending on RNG to such an extent, it's almost unreasonable to expect perfect RNG of both levels in the same attempt. The combination I got in this attempt is a few seconds faster than my previous best attempt.

Dungeon 1 and 2 (Secret path and Pax Tharkas):
There isn't much to comment on in this attempt. Everything went according to plan. Fortunately, there is no RNG whatsoever in these levels, it's all about execution. I had a feeling I was on a good pace in this attempt and tried to play it slightly conservative. The menuing could have been faster and the door transitions could have been more aggressive in some rooms.

Bosses:
Ember (the dragon) is on autopilot. The only risk is to make a menu mistake (the menu is a bit janky in this game, so that's actually a real possibility).
The Verminaard fight looks silly, but is actually a great way to end the speedrun. There is a 6-frame window to hit the boss without taking damage and the fight therefore requires some focus. Too early and the boss will teleport to the left side of the screen (= run over), too late and you'll take damage. The first cycle will always result in taking a hit (it's possible to dodge Verminaard's first attack by ducking, but it's in my opinion not recommended). 12 more hits are then needed. With the health management route I use (for more information about the route, see sdakb), I can take 3 more hits from Verminaard.

Final thoughts
When I started working on a speedrun of this game, I had some hopes that manipulations would make the overworld levels more manageable. While I eventually found several manipulations, the chance of getting the RNG required to get runs going is still far too low to make this a good speedgame. After a while, this turned more into stubbornly trying to achieve a reasonably clean run and time I could be happy with, than an enjoyable experience. All things considered, I'm quite happy with the run. It's the best pace I've been on past the overworld levels and it's not a guarantee to close out a run from that point. I think it's at least a good representation of what a speedrun for this game looks like. The run is very improvable, but it's at this point much more a question of grinding for the right RNG than about executing well. Unless something major is found, I can't possibly see myself touching this game again (and it would surprise me if anyone else decided to seriously speedrun this game either).