DeathSpank, the 2010 action RPG, takes place in an unmistakably Ron Gilbert non-Euclidianly planetoidal 3-but-also-2-but-possibly-4D universe. DeathSpank, the one with agency, with lots and lots of Justice on his one-track mind, bulldozes mobs of Demons, "Orques" (no, not orcs, silly) 'n' chicken, charging vital crystals, harvesting essential dung and retrieving key lost wallets. The character was first given life in a humble Flash animation. 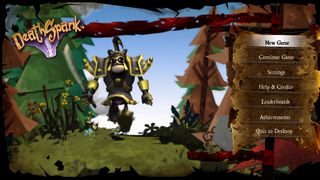 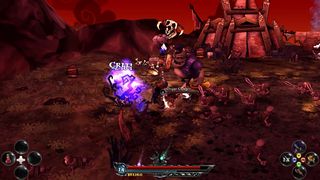 Heading towards the crystal slime pits. It looks like I was knocked off orientation, but what I was doing is making sure the outhouse saved my location so when I quit out, I would end up there instead of an unintended location. The last run I had for some reason didn’t save the location so when I didn’t execute the path to the crystal right and quit out, it put me at the wrong outhouse costing me a lot of time. I did this little couple second move to save some time and play it a bit safe. Even sometimes when you get the outhouse and quit out it’ll put you in the one that is next to it.  There is a couple outhouses in the town of Pluckmuckle and while recuing the orphan Annie if you quit out, you have a chance at ending at the wrong outhouse and have to think fast to get back on track.

For the Lord Von Prong fight it is much easier to carry with you orbs of invulnerability and health potions and just whack on him to get the fight done.

Making sure you get the spinning blades is key to making the run go faster. If I didn’t have spinning blades by the end of getting the white demon horns, it would be a reset for me. These items are completely random and the only way you can for sure get spinning blades is by buying from the vendor, but it is too expensive early on and wastes a bunch of time. We just fight the demons and if things are done in the right order, the blade has a chance of being dropped.  There is a backup in case I think it is going to be a good run. I will defeat the giant demon and use the key I got from the fisherman’s quest to get the sword from the chest.  This sword isn’t as fast as the spinning blade, but it’ll do in a pinch.