Released in October 1997, Fallout follows the Vault Dweller across the post-nuclear setting of the Southern California area. He traverses the wasteland in search of a replacement water chip for his vault and conquer the dangers of the new world. 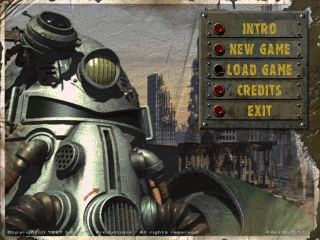 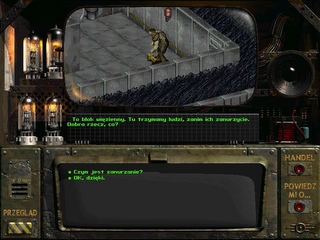 And now about the run. I'm using simillar route to the 9:19 run except for a few things:

I'm getting the robe from some guy in Military Base which I detonated. This allows me to exit MB without need of using the combat glitch.
In Cathedral I'm going to 3rd floor by conversation with Morpheus, then I enter combat to escape from Master before he starts the dialogue.
Finally when the cutscene after Cathedral is over, I'm using the terminal at Vault door to trigger the conversation with Overseer.
The rest is the same as in 9:19.

I hope You'll enjoy the run and soon I'll be able to make a single-segment run aswell.
If you got any suggestions, contact me at 1fexen AT gmail . com

Single-segment 0:09:19 by Devin Herron. A bloopers file is also available.

I'd like to thank Radix for all of his work on SDA, Ekarderif for recording this run, and several of the members on NMA for suggesting improvements for this run.

This will be my final run for the game unless I find some major improvements that can be made. There are just too many random factors that can affect the run. There are several major new tricks I use to greatly improve my time for this run, exclusively in the Cathedral. First, I no longer use pickpocketing to acquire keys to open the doors. Instead, I simply lockpick the doors (I'm not sure what I was thinking for my first run). This cuts out most of the stairs in the game, which I frequently got "caught" on during my previous run. Second, instead running out of the Cathedral, I get Jeremiah to kick me out, which teleports me outside. I made fewer mistakes while playing this time as well. You no longer see me counting out how many hexes to move while playing.

There are only two possible improvements that I know. First, if I knock a technician in the military base unconscious, I can take his robes and skip the Boneyard completely. However, this trick is completely impractical for a single segment run. You would need to be insanely lucky to pull this off. The only other major improvement would be to simply get less random encounters. This is also heavily based on random chance.

Another possible route would be to go straight to the Cathedral, and set off the bomb there by using science. Then, head towards Necropolis and convince the Super Mutants there to take you to their leader, teleporting you to inside of the military base immediately. This completely eliminates the need for the robes and the key. However, it wouldn't be possible to lockpick the doors in the Cathedral, and it would require spending a large amount of time in Necropolis getting to the Super Mutants. This method would also require you to either kill or knock unconscious two supermutants at one time at level one.

And now to list a few of the tricks I used so I don't get accused of cheating. First, when you manually enter combat, you can freely leave combat as long as you don't attack an enemy or end your turn. If you hold down the 'a' key when you end the combat, you start a new combat with no enemies. It's possible to "sneak" around all of the enemies in the game using this trick. Second, it's important to enter the military base during the day to avoid extra super mutant patrols inside the base. And finally, the vault overseer bug. For some reason, every time I try to record this run, the vault overseer doesn't appear at the end of the game. I have no idea what causes this bug, but I have found that examining the bones nearby will cause him to randomly appear behind you and start talking to you. I'll just leave this as another unexplained bug in the Fallout engine.