The Legendary Axe (Makyo Densetsu in Japan) is a horizontal platform video game for the PC Engine and TurboGrafx-16. It was developed by Victor Interactive Software and was published by Victor in Japan and by NEC in North America. It was released in Japan for the PC Engine on September 23, 1988 and in North America alongside the TurboGrafx-16's launch on August 29, 1989. You are Gogan, a muscular powerhouse with enough guts to enter the Pits of Madness. Your mission: Save the beautiful, red-haired Flare. You are strong, but you also have Sting, a sacred Axe, to help you battle strange creatures and Jagu's savage cult. Through mountain, jungle and cave, increase Sting's killing power, slay everything and rescue Flare. 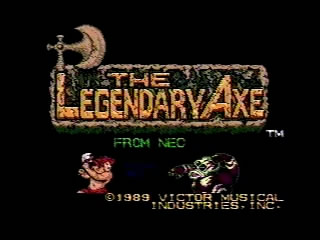 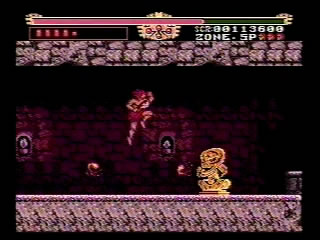 First off, a continued standing ovation to all SDA staff. Mike, Nate and Breakdown. You are Kings among men for all that you do here. Thank you. And to the crew in the forum thread for the help and support, thank you too.

So this is my first run stepping away from Nintendo. But it's a worthy move to the TurboGrafx-16. I've enjoyed the TG-16 for many years now with great games like Bonk, Keith Courage and Splatterhouse. If we could get a run of each of those too, we'd be in pretty good shape. I always thought the TG-16 was an underrated system though, like it never really got its proper place. Much like the Dreamcast went too soon in the more recent generations of gaming, the same was true for the TG-16 of the 16-bit era. This run is me paying my respects to a great console.

First off, this was the most physically demanding run for me yet. Not because of the work or long hours, but because the controller cords are so damn short for the TG-16. I had to literally sit to the side of my TV about three feet away. I can still feel the radiation. I had a breakthrough when I connected the Turbotap to add about a foot of cord. This added some weight but was worth it for the extra length and comfort. But onto the good stuff.

Time to hack and slash.

Zone 1 - Really basic stuff here. This Zone is so short. It's more of an intro. This is about as good as you get. The bats are the real hazard as they can knock you back while jumping. The hit detection in this game can be pretty fickle. The Bear fight went well, trading one or two hits is okay as it washes time-wise after the stage when the game counts down your health for points. Just better cosmetically to avoid getting clawed.

Zone 2 - Really great run through here. Half of the power-ups are obtained in this zone. I speed past the lava spouts to the amoebas. The pattern I use ensures they go off the left side enough to not jump back, except the last one, because I have to stop for the second Axe upgrade. I put him in the hole. Both boulders are cracked. The Boss Boulder in particular is as fast as I can do.

Zone 3A - This zone contains the birds who just barely missed the cut for Ninja Gaiden. Even with a predictable pattern, they get you. Makes me glad I eat their kind in real life. Other than the last bird messing me up on the first nomad, this section was good.
Zone 3B - The timing on the third rope sucks. Besides that, great run until the second Cave Man. He always falls off the edge after the second hit, of course not this time though. Onto the Aqua Lungs. Rough boss since there's so many at one time, but I absolutely destroyed them. I even avoided lag, so I'm very pleased with this fight.

Zone 4A - I dare you to find a shorter level.
Zone 4B - Boulder damage to Axe upgrade. Good stuff minus one Frog Man slip up. Team amoeba was the source of many resets. The pattern I use here has to be exact or you will get hit in the hole or they will follow you forever. And the moths at the end will pitfall you if you forget about them. Sneaky punks.
Zone 4C - Final Axe upgrade, now we kill. The only real hazard is falling to one of the underground chambers, I'm careful to avoid that. The Boss Punjabbis can be a hassle. If they stay separated you win, if they clump together you may need a reset. I punish them flawlessly.

Zone 5 - Damage abuse through the Punjabbi. All of Zone 5 is about taking damage strategically. Taking hits from enemies that deal less damage is critical, because you get hit, a lot. And I know I didn't need the second health before the first Red Nomad. I just get the statue out of the way so I can clean hit the thrown axe. Up top I keep the White Nomads to prevent Donkey Kong the Gorillas from coming out. Then I damage to the Pits of Madness.
Zone 5A - Bats everywhere. Be on the lookout for the Caped Crusader.
Zone 5B - Self explanatory.
Zone 5C - Much needed health.
Zone 5D - Just making sure the hits are not from the Gorilla to save on life.
Zone 5E - Great pass here. Missing the level four smash would be bad.
Zone 5I - Pesky Frog Men.
Zone 5J - Aqua Lungs, annoying jerks. I liked my exit from this room.
Zone 5K - I normally get hit twice, so this was a nice surprise.
Zone 5L - Here we go. This is a game of death, mostly from pitfalls. Zone 5L is the one level that will actually kill you from kicking your ass. After the second Jagi, some Aqua Lungs respawned which has never happened before. I wasn't about to waste time, so I carry them with me and boost through another Jagi, with a Ball Thrower chasing me down and a White Nomad coming in. I barely escape with my life, but with speed, which is the bottom line. Then the game doesn't even have the courtesy to give me the big health drop. But a medium is better than a small. I damage past the last two Jagis and I'm free.
Zone 5T - Self explanatory
Zone 5U - Take a hit to get over the first pipe and then go down the second.
Zone 5O - Could have been a little better with the Cave Men, but they were on top of each other causing a delay in murder. This is where it sucks that your Axe can only hit one enemy at a time.
Zone 5P -That White Nomad took hit priority causing a fireball hit from the Jagi.
Zone 5Q - This was perfect. I hit the first Punjabbi back for two reasons. One, I need the health. Two, I need the first two grouped so I only take one hit passing them. The third Punjabbi tags me again as I pass him. This leaves me with three health boxes. Just in case the Boss hits me once.
Zone 5R - Deadly Panda! I don't care if you're endangered. I'm putting you to sleep. This was a picture perfect battle.
Zone 5S - Up the stairs to destiny....

Zone 6 - It's you and me Jagu! The Warrior prevails and saves the Damsel in distress.

Clearly, this Axe is indeed Legendary.