The game that brought Mario into millions of homes was released in October 1985. As one of the foundations of the Mario series, the game introduced many Mario favorites such as mushrooms, Koopas, Bloopers, Bowser, and the Princess. 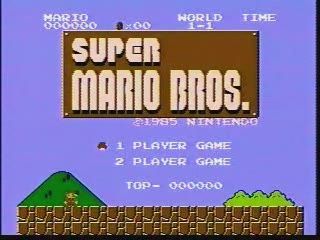 As most of you know, Super Mario Bros may be the most iconic game of all time. The Super Mario video game series has been especially important to me. I have many fond memories of playing Mario games on my old Nintendo (NES) and Super Nintendo (SNES) when I was younger. I loved playing video games with my brother and sister especially, mainly because they were really good. My brother knew all the secrets. He'd show me some trick he found in Castlevania or a secret he found in Zelda, I watched him complete quite a few titles. I loved both competing against and watching my brother play these games. It really entertained me. We spent more time playing Mario games than any other series, except maybe games like Street Fighter and Mortal Kombat.

I've always felt that I have been exceptionally good at video games. I remember getting my butt kicked by my brother in the past, but I never got tired of it. It was always fun to try and beat him. Whenever I beat my brother it was a real thrill because I usually lost to him in everything. Even though he doesn't play as often as he used to, I bet he could match if not outdo me on many titles if he tried. The main reason I play video games is for the challenge, the challenge of the game, or against others. I distinctly remember wanting to compete against people in Mario when I was younger. Back then, I decided that there really couldn't be any competition, afterall, Mario is primarily a one player game. How could you compete against others on a game like Mario?

I was introduced to speedrunning through G4TV around 2004. Back when G4 was actually fun to watch, they showed a speedrun of Super Mario Bros. I remember being amazed by the player, there were hardly any hesitations, there were no major mistakes I picked up on. I remember the speedrun being around 5 minutes and 20 seconds long. Immediately after watching that, I said to myself "I know i can beat that if I practiced." I couldn't believe there was someone better than I was at the game I knew inside and out. I figured that the video I watched had to be the world record so I decided to look it up... and this is where I eventually ended.

When I found speedrunning, I was really excited. Not only did I find competition, but a whole community of gamers at both Twin Galaxies and Speed Demos Archive. These gamers actually knew what they were talking about. For the first time, I could really compete against others on the video games I loved. This speedrun is the product of several years of contributions from many people and a LOT of practice. The speedrun is 4 minutes and 58 seconds from control of Mario to hitting the axe in 8-4. I don't think this run will ever be improved, at least not into 4:57 range. However, I will keep making attempts. I may even improve by some milliseconds, but I think this is my last iteration for SDA.

When I got a 4:59, I thought it would never be improved. When I got a message from Weirwindle111 on youtube about improvements to the 4:59, I was a bit skeptical. However, I quickly realized that he was correct. My 4:59 run had several errors that I didn't know about. Apparently, I had been making small mistakes in 8-1 and 8-3. He also suggested a method to improve level 4-2 slightly. The real reason the run could be improved was because I had no idea that jumping at the top of flagpoles was faster than landing anywhere else. Thanks again Weirwindle111!

Anyway, I've enjoyed the competition and the fun I've had with this project for all these years now. I'm willing to bet that other players could match this time, even beat it by a few milliseconds, but I still think it will never be brought down to 4:57. I think this is as fast as it's gonna get. Unless something new is discovered, I think I'm done with this run for a while. I will probably go back to lower it further in the future, but I still don't think I will hit that perfect 4:57.

Q3: What exactly did you do in level 4-2? Doesn't a vine usually take you to the warp zone area?
A3: I did a glitch. By jumping backwards into any object (As seen in 4-2 - I did three of these.) Mario gets pushed to the right side of the screen. The game is tricked because Mario is normally always supposed to be in the center of the screen. Depending on Mario's position on the screen, the game decides which vine or pipe Mario is using. In 4-2, the pipe and vine are close enough for the game to be tricked. This saves time because I don't have to sit through the vine "cutscene".

Q4: You went through the firebar in level 8-4 and did not die, why?
A4: Same as piranha plants. it just works. Poor hitbox detection.

Q5: The first pipe in 8-4 you ran into the piranha plant and did not die, why?
A5: The piranha plant for some reason disappears as you approach it. Try to kill yourself on that piranha plant in the original game, you cant. It just disappears. I know it sounds like some sort of trick or something, but really the game is just crazy.

Q6: Why did you do this run?
A6: To push the game to it's limits. Speedrunning is fun. I wanted to see what time is the fastest I could manage.

Q7: What did you do in the middle of level 8-4 to get up to the floating pipe.
A7: I did a walljump. What you have to do is catch Mario's foot in the 16th pixel of a block and then jump on the exact frame Mario catches his foot.

Q8: Didn't you take the wrong pipe to get to the water area in level 8-4?
A8: Going a certain distance past that pipe and then turning back tricks the game in a similar way that the game is tricked in level 4-2, pipe warp location confusion. That pipe is quicker to go down as well, very slightly.

Q9: Why didn't you fall into the gaps when you ran over them?
A9: You can run over the gaps, I think it's an intended feature. You can even walk over them occasionally.

*Note The hitboxes in this game are weird. List of things you can get hit by in certain spots and not die:
- Tops of piranha plants
- Ends of firebars
- Bowser's/Hammer Bros axes

- HUUUUGE thanks to Timothy 'weirwindle111' Cookson for helping me improve my 4:59 speedrun. Without him, I may have stopped trying for 4:58. His TASing helped me to see what spots I was messing up and about possible improvements to my previous 4:59 speedrun.

- Those who have encouraged me to continue with this run. I've worked so hard and my work has finally paid off. You all know who you are. I really appreciate the encouragement. Thanks to all the SDA members, the guys who hang out in #sda, my friends, and family for the encouragement.

- I'd like to thank my many competitors. It really wouldn't be as fun without all my competitors: Cyghfer, Scott Kessler, Trevor Seguin, Stanski, Pokey, JWild28, Carlos Krueger, Matt Turk, Rodrigo Lopes, Cam Allen, weirwindle111, Harry Hong, Jeff Ninneman, Barnowl, Jason Harmer, and John Lundrigan. Hopefully I'm not forgetting anyone. You guys are all AMAZING gamers!!!

- TAS guys such as Tompa, Happylee and MUGG for giving me several ideas for improvement.

- CoolMatty for helping me use dropbox.

This is my single greatest video game achievement!

This run finishes with a time of 19:40, about a 17 second improvement over my last submission. In this run, I chose not to get any power-ups (stars or mushrooms) and I finish all 32 levels without dying once. I had been experimenting with getting fire-power to obtain a faster time by killing Bowser and eliminating the "bridge dropping" cutscenes. I'm pretty sure that the luck required and time it wastes to get the power-ups ends up wasting time overall, but I'm going to test it out a bit more in the next few months.

I did not reach my goal of sub 19:30, but hopefully I will in my next attempt.