Original released by Konami in 1987 for the MSX, Metal Gear is the first installment of the immensely popular series chronicling the adventures of Hideo Kojima's most popular creation, Solid Snake. Making use of stealth, high tech gadgetry, and cardboard boxes, Snake must infiltrate an enemy base and destroy the titular war machine. American gamers got their first taste of the title when it was ported to the NES in 1988. It has since spawned a multitude of sequels and become one of the biggest game franchises around. 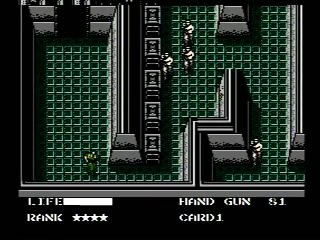 Runs on the NES version.

Single-segment with deaths 0:27:57 by Marko Vanhanen.

Hello again. After half year break i got redo my run. New one is 48 seconds faster so its break 28 minutes limit. Thats not was easy task. Yeah this game is easy but its hard perfected. New record not requires much new skills, because route is identical same as last time, all where i saved time was better execution.. I got low 28 minutes easily my every attempts. When i got 28:05, i wanted try going sub 28 minutes. I wanted got it under 28 minutes. I got 27:54, i think SDA used DVD timing so this time will turn 27:58 (same as my previous run turn 28:42 turn to 28:46) But what ever timing this is 48 seconds faster than previous one.

So i have to are really happy sub 28 minutes run. Thats was hard task. I have to rememeber at all. Yeah its take me some attempts. Not very much because game is so easy to beat. Perfection is always hard task and sub 28 minutes was limit about near perfect run. I think 27:40 is very possible. 27:30 might be almost limit by human skills used that route. Hopefully i'll somedays make this one, but its requires perfection everywhere

About TAS trick. I am got all working on console, but i find these really hard make constantly. Yes you can skip gas mask and all rations on console (in theory), but making frame advance pausing constantly is really darn hard. I think in long game like this its suicide attempt skip them and i think nobody can,t seriously make it in speedrun. But as far as i can tell every TAS trick work on real time too so maybe i have to ate my words later.

ABOUT MY RUN ITSELF

When i enter the truck and got under arrest i have to around 10-15 seconds ahead my previous SDA run. I just check out it my DVD time, so its not are very precise.

No other troubles pass shotgunner and take card 3 and BB suit and uniform. Thats went well.

BUILDING 1 RETURN**************************************
Yes i going in 2nd floor first, like i did last time. I got some troubles with walls and its not look too good, but passing all without dyings and risky are so hard here. Before i enter roof i accidentally push extra transfer. Its very common D-pad usually take two hits even i mean make one hit. Thats cost me 2-3 seconds, but as far as i can tell its was my only real mistake hold my run.

Roof was quite crap looking. Im not find correct walking lines and its cost me several frames everywhere. Roof went well my deatless run but here i fuck quite bit so i called that one my roughest spot hold my run. I used death abuse. Missing some energys before last hostage look crap, but i actually save time back when i did die more quickly.

JUNGLE RETURN*******************
I pick up 7 rations in truck. I was beat game with 6 rations, so i called that my wrong intention which cost me 2-3 seconds. But i usually lost all so i not blame myself with this. I still collect one or two less ration than last time. I have to one ration remain when i enter the truck and i pick up 8 rations max.

Overall i make very good job here. I did better ration and card intention changes than last time and its look cool. I again got contact with sexy Jennifer and she still love Solid Snake and set rocket launcher in room with me. Thats cool.

I got ammos and kill arnolds like last time. Arnolds drop card 7 and etc... I back 1st floor and pass deep river and lost rations. Coward duck drop me card 8 and there i did 2nd death abuse like last time.

BUILDING 4****************************
Starting is risky because enemys are so aggressive and sometimes drain a lot energys. Its went well. I have wall stuck before passing trap gap, thats also minor mistake. But i avoid transfer here and changed card 8 when i passing it.

Not much other troubles here. Seriously this building went better than last time.

I skip computer boss used game bug keep right when i enter in. This is maybe easiest trick in video games. Im not never are dying it.

New strategy in big boss save rations and maybe some time. This is also very easy. I used both new runs.

-Team of the SDA: Nate, Mike & Breakdown
-And my friend who help seeding torrents and etc...

I did this run day before i did new death run. Maybe this run haved little bit slower quality, but its also really good run.

I got silencer with both runs. Its take two seconds, but i think its save time back later. And its really look its save time back or at least its help running faster with some places, hard to said. This is good run, played with very good memeory about cards and etc.. I follow route as my death run, but expected there is not deaths. This category was little harder to make, i have to some troubles plan new ration intentions and etc... But also my death run its quite par as good as it. This is tight run too. Enjoy:)