Initially released in 1988 for the Sega Master System, Phantasy Star was re-released for GBA as part of Phantasy Star Collection in November 2002. When a man called Lassic calls forth a dark power which gives him immortality to take over the Algol system, he releases an evil called Dark Force which is destined to return every 1000 years. 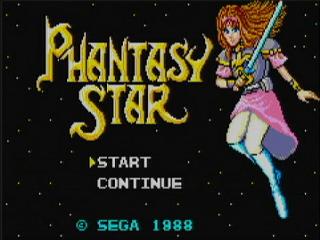 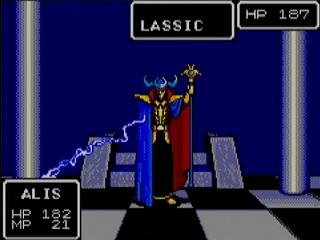 Well, this sure was a challenge of a run. After seeing the successes of Final Fantasy II and III, i decided to try to match that with another classic RPG. Thankfully there was someone in the channel that did know the game. I played this on the GBA collection since I don't have my Master System anymore.

Anyway, I took a route that was a whole lot out of order from what most guides reccomend. Oh beware of some of the segments, this is one game where you're required to build your level somewhat. Fishmen and Sandworms is how I went for that, along with a couple of mamoths (seriously they aren't worth it when you're the level I was, its better at lvl 25 or so.)

My first leveling was to get Myau up to snuff for the fight with Dr.Mad so he could use his wall spell. The second time was for the final stages against Lassic and Dark Falz.

As for item collection, I ended up skipping 2 caves in total, the one for Myau's iron tusk (there's no need for it if soon after you can buy the silver tusk) and the Laconium Axe. (Thus allowing me to skip medusa completely.)

The key in my run was the fact that many attacks do fixed damage. Fire does about 18 points per round. Wind does 30 a round. And the key item in it all, Odin's Laser Gun does 20 a round on all enemies. Dark Falz actually has a set damage of 510 HP, which is created by linking two 255 hp monsters together. The problem is that you can't attack both of them.

When it finally came down to the end of the game, I blew through Dezoris very quickly basically by running from every enemy and took out all 5 objectives without going back to twin town at all after getting the ice digger. The Wand is a very powerful item. it allows you to escape battle no matter what. As for why I chose noah to use it, he seemed to go first a lot. Another important item is the magic lamp. That allows me to not have to take time to find a flash. Very useful once on dezoris with all of those caves.

The one thing I had considered skipping was the Laconium Shield, but in the end I decided to get it, and I'm glad I did. I doubt i would have make it through falz. Speaking of Falz, Alis died during that battle. Pretty interesting that she gets revived if she dies in that battle.

There are a few bugs that should be noted about the GBA version.

1. Walking is slower in dungeons.

3. A bug that may make your game crash when you save (its completely random apparently.)

4. A bug that allows a one character to continue dodging an enemy's attack until that character has leveled up. It already happened once in my run during my first leveling up. This was not in sega master system version and may merit tracking the two versions separately if someone submits a master system run.

5. Also there appears to be some sort of incompatibility between the cart and the Gameboy Player. You'll notice a lot of noise on screen, which appears to be a problem with the syncing of the source to the GBP. I don't know what causes this, but this problem doesn't happen when played on a regular Gameboy Advance.

Well, another run down. I have no idea what my next one will be. In fact I think I may take a little break from speed running, because I'm starting a new machinima using Phantasy Star Online. I may do something on the gameboy though. Maybe turn that old Mega Man 2 run into a single segment or something.