Created in October 1994 by Beam Software, Radical Rex is a 2D platforming game where Rex must save his land, and his girlfriend Rexanne, from an evil magician named Sethron. In his way are dinosaurs, sea creatures, and other monsters. Rex has a few abilities, including a roar that kills or hurts all enemies on screen, a fire breath which can temporarily immobilize enemies, and a bubble spray which he can use while under water. 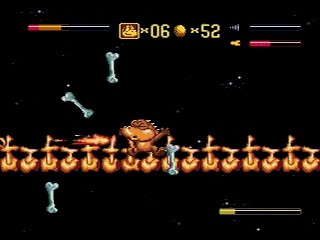 Thanks and no thanks to MURPHAGATOR for sending this to me for Bad Game Exchange some number of years ago. My first submission was reasonable enough at the time, but new things were discovered as I was practicing for AGDQ 2014. The combination of a variety of new tricks, strategies, and glitches helped me bring the time down by almost 2 minutes from the previous submission. I also want to give a shoutout to Exxonym, who worked on TASing the game around the same time I was picking it back up. A lot of his observations led to better optimizations in several levels.

I'm just going to list the major time gains and losses for each stage along with basic descriptions of new tech as it appears.

Stage 1: Same ol' stage. Getting the jump at the end could save some portion of a second.

Stage 2: New stuff at this stage includes momentum preservation tricks out of the logs. This mainly just lets me move faster, but there's one instance where it allows me to get to a vine much earlier than I am otherwise able. Otherwise a decent enough stage.

Stage 3: Missed the tube jump that saves 2 seconds, but otherwise the stage was reasonable. Otherwise a minor route change to take some shortcut tubes early in the stage. The bounces can be especially unforgiving sometimes, and my splits have a variation of about 10 seconds on this stage from seemingly minor differences. The run in this stage was middle-of-the-road as far as that goes.

Stage 4: Nothing new here, although there are some trickier movements the TAS uses that could save a second or two. They weren't known at the time of this run, though.

Stage 5: Two major changes in this stage: switching up the flame pickup order at the beginning, and abusing a new glitch I just call multi-flame. Multi-flame occurs when you get hit during a high-level flame, and you recover from the animation before the flame finishes. This lets you fire another flame before the first one finishes, effectively having two flames out at once. Done right, this can be repeated until your rhythm breaks. It can also scale up to 3 flames, but this is incredibly difficult and inconsistent in real-time. Anyway, you can see how the double flame decimates Sethron. The fight against him goes almost perfectly, and allowed for a really good savings.

Stage 6: Nothing new here. I screwed up against the boss and ended up not getting the early cycle platform, which is a cost of around 5 seconds. D'oh. Combined with the savings from Sethron 1 though, I was still a net gain compared to average for the two.

Stage 7: Oh boy. Two major improvements here. The first is simply not using a roar to eliminate the Pteradon mid-stage. This allows me to (barely) get to the boss chute before the second wind cycle. The later half of the stage was actually somewhat sloppy, but any losses are fine so long as I can make it before the wind cycle. The second major improvement is the boss. I'm not sure how or why it works, but with proper timing you can damage boost past his invisible wall and into the exit. This removed a significant chunk of RNG from the run.

Stage 8: The revised strategy for this stage is all built around getting a faster boss fight. This means I go 20 seconds out of my way to pick up an additional flame powerup right away, that actually DOES save time in the long-run. The rest of the stage held together, but some slop here and there. The new strategy on the boss relies on using the largest flame to hit both sides of the boss at the same time and forcing a certain bubble elevator cycle. This saves a huge chunk of time if done perfectly, but is exceptionally difficult. It could be done even faster with multi-flame glitch, but the savings are marginal and it's a lot easier to screw up. I screw up two of the elevator cycles on the boss, but still ended up with a quick kill.

Stage 9: Some minor changes for consistency through the stage and making use of momentum boosts, but otherwise not much changed here. I do switch up the strategy on the boss however, with a focus on double hits anytime his weakpoints open. Unfortunately I miss most of the double hits in this run, which costs some 5-8 seconds waiting for further cycles.

Stage 10: Minor improvements in this stage for movement and collecting flames, but otherwise nothing new. Multi-flame glitch reappears for Sethron 2, and I get the absolute best pattern on him. I may even have triple flame for a small portion of time. This alone made up for the mistakes of the last few stages and then a bit more.

Is the run perfect? Sure isn't. Enough went right too make up for the problems, though, and in the end gave a time I was satisfied with for the game. An ideal run could still take off another 20-30 seconds, but my interest in the game is not enough for me to take it that far. Still, I think the end product is reasonable given how inconsistent and frustrating the game can be.