Released in August of 2000, Resident Evil Survivor trades off its unique "fixed camera" controls for that of a FPS. Ark Thompson, an amnesia induced agent, must escape the Umbrella controlled island he was sent to investigate after being discovered and having his first escape attempt thwarted. 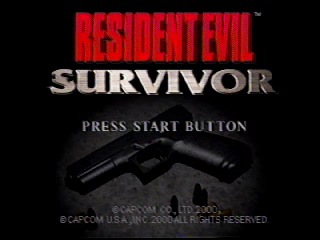 This game's not that hard to speed run actually. Most enemies can be easily dodged around, with the exception of Hunters (but then again, Hunters have been a bitch ever since the original game, so that's not surprising). Tinys (Thing in Trench Coat) is pathetically easy in this game as well. 2 clips from the handgun if he's a required fight, or just get near and back up quick, then run by after he swings.

You'll notice I went out of my way for a few pieces of ammo. While I was doing this particular run, I wasn't exactly sure how much I was going to need for the Final Boss(es) so I just grabbed whatever was mildly convenient. I fired every shot I had for the Grenade Launcher / Magnum and had only 3 Shotgun Shells left after I killed the boss, so I guess my estimate was pretty good. ;)

The only real troublesome areas were any place with Hunters. They suck to try and avoid, take a lot of shots to bring down, and move quick and hit like a Mack Truck. I despise them. Everything else went pretty smoothly.