Spelunky is a freeware platformer developed by Derek Yu, and version 1.0 was released in September 2009. The game's style takes inspiration from old NES platformer Spelunker and freeware platformer La Mulana, and the game also incorporates elements from the roguelike RPG genre - most notably, random level generation, inability to save, and a brutal learning curve that murders beginners again and again until they gain the knowledge and skill they need to survive.

Those sufficiently masochistic can download the game for free at http://spelunkyworld.com/original.html. 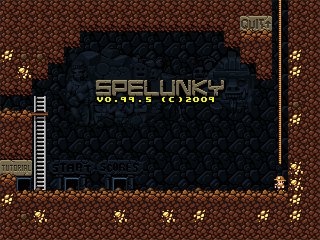 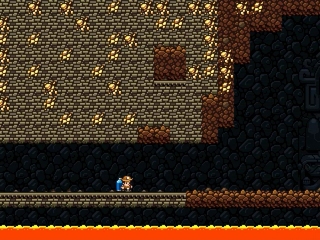 With every attempt at completing a record breaking speedrun for Spelunky, I found the most difficult section to pass was the jungle. Usually if I would get to level 9, I would make it all the way to Olmec. I completed one run early on without a jetpack or cape but it came in over 4 minutes so I knew that I needed to have one. This meant restarting if I didn't have one by the end of the caves, then I would be restarting.

Immediately, I sprinted left and ended up grabbing an edge. The reason I paused for so long there is because I was so surprised at what happened. Then getting hit by the snake 3 seconds into the game made me almost restart. I decided to finish the run though and I'm glad, because I found a jetpack in level 2. This was crucial. Now if I could just pass the shop keeper once, I'd be home free. This second hit from the shop keeper did not bother me that much. I was just happy to have the jetpack.

One thing that you may wonder is how I managed to get to the exit so quickly. I'll say after a while, it became intuition. Sometimes the lay of the level makes it obvious. I just accquired a feel for it. That's what gets these level runs under 10 seconds. Of course the ice caves are quicker to find exits anyway because the stages are so open.

Really the hardest thing for me in the temple is not the enemies. It's watching out for traps. Olmec is a challenge, even when using this method to kill him. It's easy to mess up and get smashed. Still, it's the fastest way that I've seen anyone beat him. You may be able to add bombs into the mix, but I was not about to risk that after making it this far.

After Olmec was dead, I was winging it with all those enemies and actually ended up killing them all. A bomb got rid of the block below the door, but it reappeared when I landed to enter the door. Not sure why this happened, but I'm guessing it would happen again.

So there it is, 2 minutes and 30 seconds. It's not perfect, but then again perfect doesn't really exist. Especially with a game that is never the same twice. I don't think I will ever try to beat my time, even if someone else comes along and beats it. I'm satisfied. As for whether or not I will do more speedruns... who knows? I won't say no.