Released in December 2001, Super Smash Bros. Melee features 25 classic Nintendo characters. While it is a game primarily meant for 2-4 player versus battling action, there are many single player aspects to the game, including several mini games that are all about getting low time records! 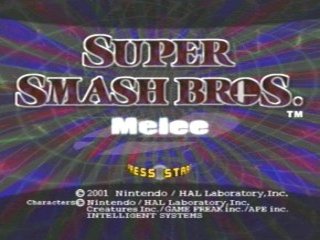 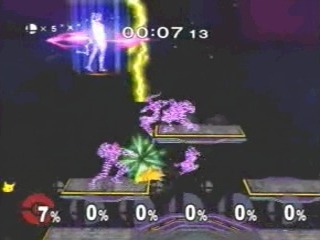 Hello everyone! As you know, this is a Classic Mode speedrun, for Super Smash Bros. Melee.

It is hard to believe that nobody managed to get a speedrun of Classic Mode onto the site in all of the time SSBM has been out, as it is an extremely popular Mode.

Now, if you are wondering how Classic Mode operates in Super Smash Bros, Melee, it is quite simple. You play through 11 stages, with 4 of those stages being set (meaning that they are the same all of the time.

These stages are Break the Targets, Snag Trophies, Race to the Finish, and the Master Hand battke at the end. Now, every other stage you fight opponents, who are all random. The stage you fight them on is random too, from a choice of two stages for each character battle/Team Battle. That makes luck an extremely important factor in this speedrun, so keep that in mind while judging this run in any way (if you do!).

Anyhow, I'd like to thank a few people for making this run possible.

Well, that sums up the thank you's section. I should tell you how this run came to be. It all started at the beginning of May, 2009. I was attempting to beat pyh189's Adventure Mode speedrun, but to no avail.

I just had terrible luck, and gave up. However, I thought of the idea to do a speedrun of Classic Mode instead. After a week of researching, I was set to go. I did some runs with Jigglypuff, but they weren't that fast and Wak had me beat midway through May.

Then, I stumbled upon SW-1988's compilation video on YouTube of him doing a Classic Mode run (compilation, so not truly a speedrun), with Ganondorf.

It seemed that Ganondorf had the potential to get a better time than Jigglypuff, which was apparent in his 23.27 second time overall. I decided to try out Ganondorf, and the rest came after hours upon hours of attempts over a week of playing.

I pulled off a great time, that took a big amount of luck. Well, now you know the story of my run, let us go onto the individual stage comments.

(Note, I put Ganondorf as the title in each stage/battle name just to let you know that he is me, just in case you forgot I was using Ganondorf for this run.)

In case you were wondering, the time displayed after each stage name is the total time it took me to beat the stage. So, you subtract the remaining time from the starting time. For example, if the stage started with 5 minutes and I beat it with 4 minutes and 30 seconds left, it took me 30 seconds exactly to complete the stage.

Overall, the total time added up for each individual stage adds up to an amazing time of 32.77 seconds.

That is it! I hope you enjoy or already enjoyed my speedrun, and get some inspiration to do a speedrun yourself. If you have any questions about the run, send me a Personal Message on SDA's forum. I'll answer every Personal Message I get, so don't be afraid to ask. Have fun, and thanks for watching!

Author's comments: the funny part is I was trying to achieve such a time for hours that day, and a girl I know decided to call me and told me how lucky she was today, and I was like oh really? And continued to play... and this run is the fruit of me playing while talking on the phone.

2- I usually restart at this stage. That time it was the second fastest stage I can do, after Mushroom kingdom II. And yeah I owned it. My average for this stage is about 5 seconds.

3- I love killing myself at BTT.

4- Yoshi got it in the nose. Glad it was one of the characters I can beat in less than a second.

5- If I rested link too soon, one of my partners would have stabbed link on his way to die, and link would have not died. My partners are fuckers and screwed many of my runs. But on this one everything went fine.

7- Out of the levels to complete in 1v1, the ones I hate the most in order are: Mushroom kingdom I (automatic restart), Hyrule temple (Automatic swearing at my TV screen), Fourside and Jungle Japes. On this run, only Jungle Japes appeared, I'm lucky.

8- The only foes I hate to encounter are the DKs and the Pichus. I fell on Ness, something I rarely get, and did well enough.

11- 3 seconds of mistake here. But since the rest of my run had no real mistake, I kept it.

I had a lot of fun running classic mode. I thought it was 100% random and stuff, but at some point I figured out a lot of path in every character, depending on the stage etc. The only real random things are what character you'll face up, and your damn partners on stage 2 / stage 5. Beside that, Ice climbers in the icicle mountain are hard to figure out what the fuck they are doing, sometimes.

All that work bought me to a sub 40 seconds, which I'm more than glad because I didn't think enough luck in a run would be possible. My reach was something aroune 43 seconds to.

If you want to contact me, do it via my youtube channel: Wak017. You'll also find out a lot of interresting SSBM videos. Enjoy!

First I'd like to thank Gigafrost and pkmvodka for tips on some of the levels, as well as Wak who started the idea of a speed run in Adventure. I always liked to play competitively in the SSBM 1P Modes. But I wasn't sure if I would be able to finish this run because the randomness of the exit room in the Underground Maze made it very frustrating. I pulled it off anyway, but not without mistakes though. Sorry about the video quality in 2 instances, one in Big Blue and another in Icicle Mountain-apparently I recorded on a bad spot. They don't really occur at significant areas though.

Here is a breakdown of each level:

That's a game total of 3:15.27, with about 8 seconds worth of mistakes. Overall it was still a pretty clean run, much better than I expected, and under 7 minutes which was my goal; though I may try to do it again just because of that stupid Wire Frame battle. Optimal time would be about 6:43 / 3:06, including the 2.7 strat for Mario & Peach.