Released in October 2006, Justice League Heroes: The Flash was released as a supplement to the game Justice League Heroes. Instead of being an action rpg, JLH: The Flash is a beat 'em up that starts with the Flash investigating a robot invasion in Keystone City. The game received good reviews for having colorful, well-animated sprites and unique moves such as flash speed, which simulates the Flash's super speed by slowing down everything else to snail speed. 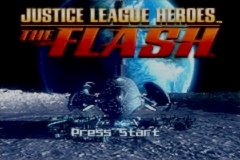 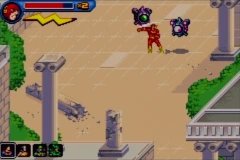 Before I start rambling, I need to thank some people.

Hey everyone, I still run games! And like always, I have an IFAQ for everyone to read.

A: InFrequently Asked Questions. I was talking to kareshi one day (the Ghosts 'n Goblins runner) and he said he loved the FAQs that come along with my comments, even though no one asks those questions. He then went on to call them IFAQs. I figured he had a good point, so I decided to rename my FAQs to something more fitting.

Q: Why run such an obscure game? You usually run well-known games.

Q: How are you pulling off such big combos?

Q: Why do you miss so many punches?

A: This game has very finicky hit detection when it comes to punching enemies. You need to be almost perfectly lined up with an enemy to hit, which is why seeking is very useful.

Q: Why are you running along edges so often?

A: A lot of battle triggers are activated when you're in the middle of the screen. You can avoid a lot of battles by running along the edges.

Q: Why do you sometimes run around the screen like a moron (this is most noticeable at the end of Metropolis 1)?

A: Because it enables something I call the wiggle skip. First off, you need to be in a screen where the enemies don't appear unless if you get too close. You start running around in small circles, and eventually, the screen should scroll a little and you can pass by without fighting.

Q: Why do you sometimes hit enemies who are off screen a couple of times, then move on?

A: Because hitting enemies off screen sometimes lets you skip battles, but it's very inconsistent. This is why you will occasionally see me trying to progress, but failing.

Q: Why did you almost always use your assists in the order of Superman, Martian Manhunter, Wonder Woman, then Green Arrow (note, I never used Black Canary in my run)?

A: Because that's the order from fastest to slowest. I used frame advance on VBA to test this. Wonder Woman can be slower than Green Arrow if she uses her combo attack, but I got lucky in my run and she only used it once.

A: The Superman assist let me skip the two red robots, while the Martian Manhunter assist let me end the stage early (notice how the gorillas are trying to rape me).

Q: Why didn't you dodge most of Killer Frost's attacks?

A: Because dodging takes longer than getting hit.

Q: Is Metropolis 1 supposed to be that short?

A: No, but it's a great example of how broken the game is.

Q: I don't understand what you're trying to do during the Brainiac battle (yes, I'm aware this technically isn't a question!).

A: I'm not sure I understand either, it was that bad.

Q: Why didn't you restart during the Brainiac battle?

A: My luck throughout the rest of the run was very good, and it's improbable to get lucky on all of the random elements in this game.

So there it is, my first run in six months. Don't worry, I haven't retired yet, but making sure everyone else's runs get posted is a wee bit time consuming.

If you're wondering what I'm going to run next. I'm currently trying to improve my Contra III run. Then I would like to do a Sunset Riders run, and finally run the speedrun equivalent of Duke Nukem Forever (hint: it has a 2 in its name). If I get too lazy to run "the game" (which will probably happen in two weeks), then I'll work on Metal Slug 1 and X (PS2 anthology).