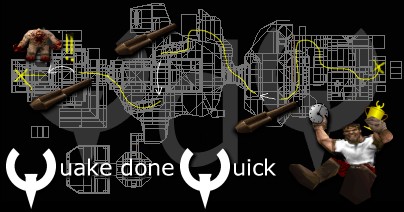 Here at QdQ we normally play Quake on the hardest available difficulty, Nightmare. But to show off skill without being disturbed by and/or having to kill annoying monsters, we also make runs on the easiest difficulty, Easy.

The difference between a run and a 100% movie is that the runs have only one goal - and that is to get from start to exit as fast as possible. In the 100% movies, we also kill all monsters and find all secrets in the maps before exiting, and also make sure to visit all the secret levels.

Click on a category to display all the available movies. Click here to display everything, or here to hide everything.

Our fastest ever nightmare run through Quake, and a 54 seconds improvement over the highly popular QdQwaV. This is Quake Speedrunning at its peak!

This run features performances from a greater variety of players and much improved playing skills, as well as camerawork and some neat production effects in the movie version.

The movie that started the hype... Demos by Yonatan Donner, Matthias Belz and Nolan Pflug.
Nightmare 100%

Our fastest run through Quake on nightmare skill getting all kills and all secrets on all available maps in the single player campaign. The run is a huge improvement over Quake done 100% Quicker. The majority of the levels are run by Thomas Stubgaard.

Preview of the eventual Quake done 100% Quick with a Vengeance, including only the first episode. Demos by Thomas Stubgaard, Connor Fitzgerald and Jozsef Szalontai.

A replacement for the earlier release. Every single demo was improved. Released in first-person view only.

This is a speed-run where we get every kill and secret in the game. Quake done completely! There are less short-cuts, but a lot more blood and gore. Available in both first-person and refilmed versions.
Easy run

This successor-to-all run finishes Quake in the fastest time imaginable, killing monsters only where necessary.

Two easy runs through Quake, one of them using bunnies.
Easy 100%

This is a speed-run in which we get every kill and secret in the game. It's the sleeker Skill 0 sister of the previous Quake done 100% Quick run. Like that release, it's a nice combination of both speed and destruction. This is a first-person recording. There is no refilmed movie version.

Other Quake runs on the original levels

Nearly 6 years after the release of QddQ, and quite a few struggles to get this done, we give you Quake done double Quick lite, a 2-player 9:55 easy run through all of Quake.

This is a run that completes Quake on Easy difficulty, getting getting from start to end as fast as possible, killing all the monsters (except zombies) using just the axe.

Between August and December 2002 we ran a series of speedrunning contests on the Speed Demos Archive (http://speeddemosarchive.com/quake). These contests ran on each of the levels of "Episode One : The Dimension of the Doomed" in turn and you simply had to gib every monster on the level as quickly as possible and exit. The exit stats of the winning time were used as the starting stats for the next contest in order to turn the whole thing into a complete run.

This is another speed-run through Quake on Easy skill, with a new twist: we completed the levels in reverse order, starting at end and ending with e1m1. This enables a different set of routes and tricks than usual.

A run through Quake on Nightmare skill, undertaken by two players who cooperate to finish the levels faster than would be possible in single player mode

Fiend Run Lite was a project undertaken by Peter Horvath and Attila Csernyik. Using the "morph" game mod by Jeff Epler, they recorded a QdQ style first-person run playing as a fiend rather than as a human player.

When they showed it to us we thought it was so cool that we ought to refilm it a little and add our usual excuse for a plot. For the refilmed movie, we also changed the normal fiend model into a special one of the QdQ guy riding the fiend, but we kept the existing animations and movements, so this is still "real" gameplay, even if it is a bit unusual!

This is a demo showing some of the highlights from the Skillz Test #4 challenge we initiated on E1M3.
Mission pack and episode runs

This is a run that completes Quake Mission Pack 1, Scourge of Armagon, on Easy difficulty as fast as possible. All done by Conny 'jukebox' Wernersson.

RUN DMC is a run through the DeathMatch Classics custom episode on Easy skill, produced by TeamSDA.

This release contains speed-runs through the Blue Hell mission pack for Quake. Here, we complete the mission pack in two ways: on Nightmare speed, just caring for time, in a total of 38 seconds, and on Easy skill, getting all the kills, in 51 seconds.

In this run, three players, namely Mathias Thore, Thomas Stubgaard and Thomas Bergendorff, go through the Runner's Delight mission pack in cooperative mode, finishing the levels as fast as possible on Easy skill. As opposed to the old run, we used unrestricted bunnies in this project.

In this run, two players, namely Will Marsh and Ilkka Kurkela, go through the Runner's Delight mission pack in cooperative mode, finishing the levels as fast as possible on Easy skill, using restricted bunnies.

Various runs through the excellent free mission pack Beyond Belief by Matthias Worch. All kinds of runs are here; nightmare run, nightmare 100%, easy 100%, and two easy runs. Some of the runs have recams.

This is a run that completes Quake Mission Pack 1, Scourge of Armagon, on Nightmare difficulty as fast as we could manage. (Also see our improvements page.) We spent a longer time on the production of the refilmed version of the run than we have with any previous release; we'd consider it to be a proper Quake movie based on the original run.

SdSlite provides a whole new run through Scourge on easy skill. Significantly faster than the original SdS run, with more tricks than you can shake a stick at.

This is a run that completes Quake2 on Hard skill as fast as we could manage, without resorting to unrestricted bunny-hopping.
Doom, Doom II

Runs not by us

The Harvest of Secrets

Easy run through Quake by Mathias Thore, Martin Selinus, and Robert Maglic. Each map is finished along the route iD intended. Finishing time is thus 23:10.

Easy run through Quake by Mathias Thore and Robert Maglic. Finishing time is 11:44.

David Hocking has made an Easy skill speed-run of Quake all by himself in a time of 11:55, a very respectable result indeed. The run is called SnooP Shaft's Shub

Two Swedes, Oskar Calson and Magnus Olsson have released QKDSpeed, a run of Quake on Easy skill in 12:32. The time is one and a half minutes faster than our own Quake done Quick lite.

Cheated run though parts of Quake, performed by Phil.